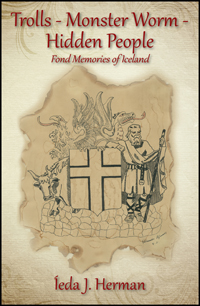 Íeda Jónasdóttir grew up in Iceland, “the land of fire and ice.” In 1944, at age nineteen, she met and eventually married an American serviceman, Del Herman, who was stationed in Reykjavik. After WWII, she came to the United States, where she and her husband made their home in Illinois. Over the years they became parents of three boys and seven girls, whom Íeda enjoyed entertaining with folktales of her homeland. The children were especially intrigued with stories of the “Hidden People,” who were known to be helpful folks, but who did not take kindly to naughty children climbing on top of lava rocks—the Hiddens’ castles. As a citizen of Iceland, Íeda enjoyed the odd beauty of her country—the mountains, the glaciers, the fjords, and even the eruptions of awesome volcanoes. In her memoir, she writes lovingly of growing up in Iceland and shares its rich history of legends and folktales—stories interwoven with the hopes, fears, and hardships of day-to-day life in this mysterious land.

Íeda Jónasdóttir graduated from the Chicago School of Interior Design and owned and operated her own design shop. She wrote several decorating articles that were published in local newspapers and magazines, and a handbook, How to Decorate With Sheets and More, which was made available at the numerous seminars at which she spoke: schools, women’s clubs, and church groups. After retiring in 2009, and with her family grown, Íeda wrote her memoir—Trölls - Monster Worm - Hidden People. She then enrolled in and graduated from the Institute of Children’s Literature, West Redding, Connecticut, and she is currently writing an adventure book for young adults.