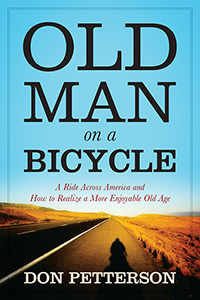 When Don Petterson, a former American ambassador, told family and friends he intended to ride a bicycle from New Hampshire to San Francisco, most of them questioned his judgment, if not his sanity. He was in his seventies, hadn’t been on a bike for years, and had never ridden more than a few miles at a time. But, in May 2002, putting doubters—and self-doubt—behind him, Petterson headed west. Laboring against strong headwinds, struggling up steep hills, or coping with extreme weather, he sometimes wondered what in the world he was doing. But he kept going—the lure of riding his bike across the Golden Gate a compelling incentive. Ahead of him lay many challenges—among them, riding his loaded bike over the Rocky Mountains and Sierra Nevada, crossing the Great Plains in brutal summer heat, dealing with the aftermath of a collision with a car, and traversing Nevada’s basin and range country and the Great Salt Lake’s desert. His rewards included passing through spectacular mountain forests, experiencing the aching beauty of the lonely plains, and viewing the grandeur of the West’s sculpted canyons and mesas. In Old Man on a Bicycle, the author relates how he prepared for the 3,600-mile journey and what he saw and did during the two months he was on the road. In addition he rebuts the misconception that aging invariably means debilitating decline and, drawing on certain events of his ride, offers research-based advice on how to ease the physical aspects of aging. It’s an inspirational account, emphasizing the importance of exercise to physical and mental well-being.

A retired Foreign Service officer whose ten overseas assignments included ambassadorships to Somalia, Tanzania and Sudan, Don Petterson is the author of Inside Sudan and Revolution in Zanzibar. After his solo bicycle ride across the country he rode from Miami to New Hampshire, where he lives with his wife. Note for Reddit: This is my website.