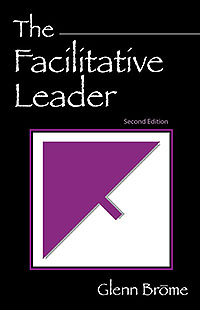 "It used to be said that behind every good man was a good woman, until women started taking lead roles. In Glenn Brome's book on leaders, whether they are male or female, you will find that behind every good leadership principle is a KILJOY, pointing the way. Whether the way KILJOY points is the right one or the wrong one is up to the reader to determine, but you can be certain that Glenn Brome's advice is spot on." -- Chip Beck, Political Graphics Service.

This is the book that finally puts Really Effective Leadership Practices in clear-cut uncomplicated language.
Regardless of where you are in Leadership-this Book will give you a clear, concise, Refreshingly Straightforward and Honest process that puts into plain language, How & What Effective Leadership is!

As you read through, the 'light bulbs' will continually go off as you realize more and more ... It All Comes Back To
'Facilitative Leadership!'

Transform Your Organization With Facilitative Leadership

So, Facilitative Leadership: is leading by committee … not!

It is not about getting everyone together and asking, “what do you and you think?” Everything cannot be decided via committee! Especially if your work involves things like law enforcement or the military. The front lines are not the place to take a ‘straw poll’. Even as I say this, and even in those aforementioned operations, there are times when a leader can, and should get people together to talk about how to improve the operation; by genuinely asking for input from all levels. That is what facilitative leadership is about.

For this process to work, the leader must be successful at creating an atmosphere where people not only feel comfortable contributing ideas and suggestions, but where the leader actually acts on that input.

Acting on input does not mean doing everything the group tells you to do. It does mean making it clear to the group that their input is valued by defining how that input will be used. Many times a leader will give the impression that if the team members give honest input, they will be given their ‘marching orders’. This is why the leader must clarify prior to asking for input how that input will be used. For instance, let the group know if you are:

These are just examples of how to explain your intentions when involving direct reports in the decision-making process. The added advantage of this clarity is that it is another critical step in building respect, trust and rapport.

This model is the strategic outgrowth of the changing role of leadership.

Back in the day, and hopefully this does not mean last week for you … the leader stood in the middle of everything and directed the team with one-way communication. Essentially that leader would say, “jump” and the followers would need to know how high.

As this leader progresses she/he allows for two-way communication, but the leader is still in the middle directing the activities of the group.

Continuing this progression, the leader steps out of the middle - and becomes a part of the team. This also allows for better communication – actually between team members. The leader is still responsible but does not ‘push’ her/his people, they tend to ‘pull’, to get people to follow them – not to push and micro-manage them.

As the leader progresses even further, they can actually step away from the day-to-day aspects of the area. This affords even more communication between the members of the team. Again, you cannot do this until you have helped the team members interact with each other on a ‘level playing field’. This is why you should be familiar with the elements in this book that can help you build those essential skills for your subordinates – so you can be free to work on the more strategic elements of your job, instead of the tactical.

The skill required for this process is critical because the typical leader’s area of span and control is not retracting, it’s expanding! So you will be required to ‘run’ multiple departments, and that cannot be done effectively if you are ‘stuck’ in the middle of one trying to direct everything.

Now, keep in mind, when you step away do not disengage! Because you ‘cannot expect what you don’t inspect’. So, as you have allowed for the skills of your teams to be sufficient enough for you to ‘step away’ – you must be accessible and continue to coach and hold everyone accountable.

Facilitative leaders also have courage. This starts when we are very young …

A six-year old and a four-year old are upstairs in their bedroom. “I think it’s about time we started cussing” the four-year old nods his head in approval. The six-year old continues. “when we go downstairs for breakfast I’m gonna say “hell”, and you say “ass”, “ok!” The four-year old agrees with enthusiasm. Their mother walks into the kitchen and asks the six-year old what he wants for breakfast. “Aw hell, mom, I guess I’ll have some cheerios.” Whack! He flies out of his chair, tumbles across the kitchen floor, gets up, and runs upstairs crying his eyes out, with his mother in hot pursuit, slapping his rear every step. The mom locks him in his room and shouts, “you can just stay there till I let you out!” She then comes back downstairs, looks at the four-year old, and asks with a stern voice, “and what do you want for breakfast young man?” I don’t know,” he blubbers, “but you can bet your ass it won’t be cheerios.” -origin unknown

Courage is exemplified by that leader that has the ability to not fold under pressure. Take this situation; you have been coaching a direct report on leading an important project. ‘fast forward’: the project does not reach its target. Your boss calls you in an asks, “what the h_ _ _ happened?!” Most people in that situation would start to explain about how they have been coaching a member of their team, blah. Blah, blah … wrong answer! A facilitative leader would have the courage to say something like, “I am responsible, and I will make sure, that doesn’t happen again…” now that takes courage. You don’t ‘turn the person in’ to the boss. You are ultimately responsible for your group’s output, so act like it!

Now, you do have some conversations with that direct report about what happened. Clearly there were some miscues during the ‘coaching’ process that need to be revisited. Keep in mind, during these ‘discussions’ that it is and was a two-way street. It is the employee’s responsibility to accomplish the goals and it is your responsibility to be sure your people are on-track.

Another essential ability a facilitative leader possesses is their capacity to ‘take counsel’. They have the ability to listen to multiple points of view, including those who typically do not agree with them. This is a powerful trait because you tend to have more complete input, thus making better decisions. To do this, a leader must be able to capture the key kernels of information. They have to be able to maintain bridges between people and create an atmosphere where people share information with each other – largely because they have earned respect, even from people who usually do not see things the same way.

When one has mastered these skills they are recognized as a facilitative leader.

© 2006, Glenn Brome. Reprint rights granted to all publishers so long as the article and by-line are kept intact and all links are made live.

This excerpt of the book ‘The Facilitative Leader’ is provided by Glenn Brome. Glenn is a leadership expert, professional speaker and author who pulls from his solid background as a leader in motivating people to achieve superior results. He has ‘real world’ operating experience in senior leadership roles in both retail and human resources. His most notable employer was the Walt Disney World Company where he also coached top executives to realize a vision of change and high performance. To purchase the book ‘The Facilitative Leader’ or to book Glenn as a speaker visit http://www.GlennBrome.com. 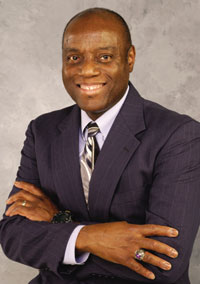 Glenn Brome is a student of the human condition, wielding the written craft to enrapture the mind much like an artist wields a brush. The pages are a blank canvas on which to draw from a talent heralded by many and matched only by an imagination that rises to the task.
Glenn Brome captures the Essence of Practical Leadership in this Powerful, but marvelously simple approach to Understanding, Communicating, and Practicing Effective Leadership - As you read through, you too will become a believer that in more cases than not --- It All Comes Back To Leading in a Facilitative way.