5 Decades Behind The Musical Curtain 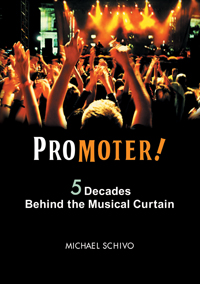 5 Decades Behind The Musical Curtain

A strong, successful, fiercely independent and sometimes confrontational promoter. It would be easy to label Michael Schivo as one of a lost breed, but he is a true original. In an era of consolidation and commercialization of the concert industry, Michael sees beyond the dollars and cents in order to produce successful shows. His perspective on the touring industry, while not always popular is often correct and his survival is testament.
~ Fred Hansen, Agency for the Performing Arts

I never knew where this guy was gonna show up. One time he showed up at a concert I was promoting and proceeded to take the stage at the break and announce his own shows. Chutzpah…that’s what he had!
~ Norman Cheney, Competing Rock Promoter

Lasting 5 decades in the concert promotion business is a milestone. His achievements are substantial having proven himself to be one of the most prolific promoters in Smooth Jazz, promoting nearly every major Jazz act in his multiple markets of top venues inclusive of his legendary Jazz Festivals in Nevada, California and Washington.
~ Cliff Gorov, All That Jazz

A man and his music. The quintessential promoter for the generations that made a change in our lives, that’s Michael Schivo.
~ Tim Sage, Wynn Resorts

A backstage pass back into Michael Schivo whacky life as a consummate promoter. Michael helped give legitimacy to the music industry linking the business community and the rock world together that allowed the two factions to work side by side maturing the raw scene into a profitable business.
~ Calamity Jayne, Performer, Promoter and Venue Operator

Michael was one of the original Nevada concert promoters who had to endure all the hardships and challenges of the first groundbreakings, hostile city commissioner meetings and problematic venue situations. A true music pioneer who brought in the greatest legendary talents of our day and paved the way for the rest who now take it all for granted. His creative genius, tenacity, vision and talent would change our stages forever.
~ Laurie Buckley, daughter of humorist Lord Buckley

The author hails from the generation that embraced rock and roll at the time when it became a major influence on society. Understanding music came early for Schivo who was schooled daily from a big wooden radio circa the late 1940s onward.

When Rock hit the airwaves, he was already a child veteran who understood the emotional effects of music from the listener's perspective. With the arrival of the 60s, he was ready to begin his impressive five decades as one the most durable rock and jazz promoters in the United States. Learning the ever-changing meter of live concert promotion became a passion for Schivo, whose ability to promote any and all kinds of music in any venue assured his accomplishments and survival.

Schivo was no angel; no one who was worth their salt in those decades could have been. He was a tough competitor and this book speaks the truth and demonstrates his love for both the music and its audience. Michael Schivo is a free thinker who bootstrapped his way up the long ladder of success.

Promoter!..5 Decades Behind the Musical Curtain cracks wide open what has happened to the music biz, complete with war stories from conflicts with other promoters as well as a collection of anecdotes that provide the lowdown on agents, managers, record companys and the mergers that have nearly ruined the current concert scene.