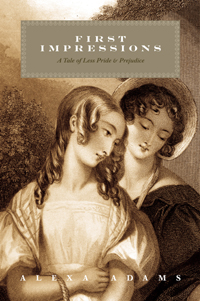 "I see how it is Mrs. Bennet – a rich man has danced with Lizzy. When he arrives to ask for her hand do show him in.”

In Pride and Prejudice, Fitzwilliam Darcy begins his relationship with Elizabeth Bennet with the words: “She is tolerable, but not handsome enough to tempt me; I am in no humour at present to give consequence to young ladies who are slighted by other men.” What would have happened if Mr. Darcy had never spoken so disdainfully? First Impressions explores how the events of Jane Austen’s beloved novel would have transpired if Darcy and Elizabeth had danced together at the Meryton Assembly. Jane and Bingley’s relationship blossoms unimpeded, Mary makes a most fortunate match, and Lydia never sets a foot in Brighton. Austen’s witty style is authentically invoked in this playful romp from Longbourn to Pemberley.

“Oh she is the most beautiful creature I ever beheld! But there is one of her sisters sitting down just behind you, who is very pretty and I dare say very agreeable. Do let me ask my partner to introduce you.”

“Which do you mean?” and turning around, Darcy saw a dark haired woman, of shorter stature than her sister, just perceptively tapping her foot in time to the music as she watched the dancers. She did not possess the impressive beauty of her sister, yet his quick mind was struck by the cheerful liveliness of her appearance. This lady did not pine over sitting out the set, sulking like so many women he had observed. No indeed – rather than languishing she displayed an easy pleasure in her surroundings and a generous goodwill towards those enjoying the dance. Darcy wished he could be so content, so able to relish his chosen role of spectator. He knew it to be the safest place for him. Were he to seek an introduction at this juncture it would, undoubtedly, incite unwelcome attention and gossip while forcing him to indulge in idle conversation with a young lady whose companionship surely must be intolerable. Why should he subject himself to such atrocities? A dance was entirely unthinkable. He moved to turn back round in order to give Bingley a decidedly negative response to his proposal when the lady's eyes locked on his and he realized, with a great deal of horrified mortification, that she had obviously overheard Bingley's idiotic suggestion!

She gave him a knowing look – he could almost read her thoughts: “Well sir? Would you deem my company insupportable?” There was no denying the challenge implied in the raised brow: she was clearly calling him out. Was retreat possible for a man such as he? To not step forward now would be ungentlemanly, an insult to what he must admit to be an intriguing young lady – unthinkable! If there was anything certain to overcome Darcy's timidity it was the need to always uphold the dictates of etiquette. Why else would he have come to this unfortunate assembly in the first place? He was a Darcy of Pemberley after all, descendant of some of the oldest families in England, nephew to the Earl of _________. He had the honor of his name to uphold; it didn't matter if it meant attending an assembly with his host or preventing the infliction of an insult upon a lady, he would fulfill his duty.

“Very well Bingley. If your partner would be so kind, I would be happy to make the acquaintance of her sister.”

A lover of Jane Austen since her childhood, Alexa Adams' study of her work has been extensive. Residing in the Delaware Valley with her husband and two cats, she looks forward to continuing her engagement with Austen and the remarkably familiar characters she has bequeathed to this world. 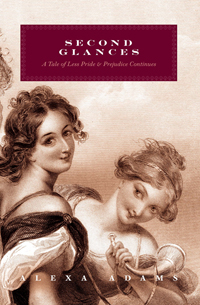