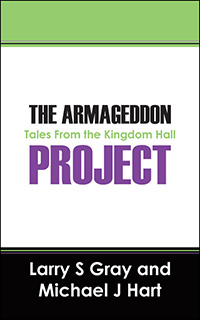 And the Truth shall be told...

At age fifteen my cousin Michael was so distraught and out of his mind over what was happening in his life that he chased his father down the street with a huge tree branch. What did his father do to encourage such an outrageous outburst? He tried to get his son into the car so they could travel to a four-day summer convention of Jehovah’s Witnesses in Pittsburgh, Pennsylvania. After fifteen years of knowing nothing but the bizarre lifestyle of a childhood in the Jehovah’s Witness organization, young Michael finally snapped. That is by no means the end of the story, but it was a sad and major turning point in the lives of both he and his parents. I, too, was raised from infancy as a Jehovah’s Witness, and I’m here to say that the experiences of our childhoods will shock, amaze and in some cases infuriate those who read them.

This is a provocative and highly disturbing work of non-fiction featuring brainwashing and isolationism, sex and demons, blood and fear, Bible prophecy, mankind’s impending demise and the forbidden fruit...

A detailed journey through the inner sanctum of a prominent religious organization as told by two people who were there.

Herein lay the only evidence of a baseball game in the Bible; Genesis 1:1 “In the big inning…”

And that, my friends, is about as humorous as this tale is going to get. We are not going to spend a great deal of time and space relating and debating Jehovah’s Witness dogma and doctrine, as there are quite a few well-written books of that nature already available to the public. This work is neither a pro-Jehovah’s Witness promotion nor an anti-Jehovah’s Witness diatribe; the opinions derived from reading this material will be strictly up to the reader. From the perspective of the authors, however, the tale that shall be told is a long and sad one - interesting, entertaining, provocative, scathing, nearly unbelievable and very disturbing. I have a family member who also was a teenage Jehovah's Witness and he also will be telling his tales in this project; there is reason to believe that he's emerged in a bit worse shape than I have. I will explain these reasons later, but herein, just a few things that encompass being born, raised, and then living life as a teenage Jehovah's Witness. Therefore, this story is more of a personal nature, a memoir, a documentary of sorts, from the perspective of two persons who spent their entire childhoods as Jehovah’s Witnesses and knew nothing else. We will, however, devote the first and second chapters to a history of the Jehovah’s Witness organization and an overview of their doctrine and teachings so that readers who are totally unfamiliar with the Watchtower Society and the Jehovah’s Witnesses will not end up completely confused by the references and the jargon. We'll briefly touch on such Witness doctrine as the prohibition of celebrating holidays and birthdays, their prohibition of blood transfusions and other medical procedures, their stand on rape, their insistence on members’ complete isolationism from anyone who is not a member, and their demand for strict and unimpeded adherence to the Watchtower Society's rules and regulations. We'll touch on Armageddon, the 144,000, Bible prophecy, the New World Translation of the Bible, the elders and the Governing Body. We will also supply a glossary of terms and phrases used strictly by members so that you, the reader, will have some earthly idea of what we’re talking about.

Those of you who are former Jehovah’s Witnesses will recognize the content for what it is; the material of the first chapter will stir memories of what you learned and how you dealt with it, and you'll be reacquainted with terminology likely long forgotten. You may then join us for the long strange trip through childhood and teendom as Jehovah’s Witnesses and, perhaps even more disturbing, the aftermath of the time spent therein. 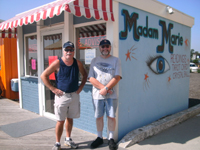 Larry S Gray studied the Bible intensely and continued to educate himself in religious matters after his departure from the organization. He has done deep research in the fields of cultism and mind control, as is reflected in his fictional material.

Michael J Hart has a vast Biblical knowledge, along with a strong interest in the physical sciences. His contributions to The Armageddon Project are indispensable.

Both Mr. Gray and Mr. Hart are experts in the field they write about, having collectively spent thirty-five years within the organization, and their entire lifetimes dealing with the repercussions of their departure.