A Vengeance of Tears

by R. A. Siracusa 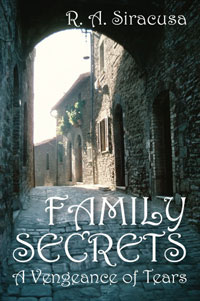 A Vengeance of Tears

by R. A. Siracusa

Deception, passion, and love battle in a world where nothing is as it seems.

Disdained by her father and facing an arranged marriage, young Angela Rosarno yearns to be loved. She flees her home and travels to Sicily into the arms of Santino Camastro, a man she has come to love through his letters, though never met. Rushed into marriage, she learns-too late-that her husband is not the man who penned the letters. What follows is a tale of intrigue. Determined to discover the truth, Angela's actions set off a series of betrayals and murders. By the time she discovers that her husband's brother is the man she loves, she is hopelessly trapped in Santino's ruthless world of ambition and greed. When deception, passion, and a mother's love collide, will Angela have the strength to escape?


IT WAS AN INCONVENIENT time and place for her to die.


With the toe of his polished shoe, Santino Camastro poked at his wife's limp body among the boulders littering the shoulder of the road. Her legs folded awkwardly, her head twisted to one side, like a rag doll tossed on the ground by a careless child.


He rolled her away from the rocks and onto her back in the dew-damp grass. Blood-soaked hair straggled across her face, almost obscuring the whites of rolled-back eyes.


Rosa, his wife's aunt, was hobbling toward him screaming, "No! My little girl, my gioia!"


When she reached him, she pounded on his chest with blue-veined fists. "Monster! Murderer!"


Infuriated, he grabbed her by the thin neck and held her away, closing off the air so she could not breathe. Her fists continued to flail.


"Never say that again. Now, tell me quickly, how long can the baby live?"


Rosa squirmed in his grip, little gurgles of terror bubbling up from inside her. "Not long enough to get her to a hospital."


Without hesitation, Santino stripped off the jacket of his immaculate grey silk suit, folded it inside out, and laid it carefully across a boulder. Then he knelt by his wife's body, pulled out the large pocket knife he always carried, and slit the cotton nightgown, exposing the white mound of flesh.


Mamma, he prayed, guide my hand.


Drawing a long breath, he gripped the knife firmly and thrust its point into her belly below the navel. He would not allow her to rob him of his heir. Blood gushed over his hands. Red rivers of warm blood. He moved the knife upward, slowly, steadily through the flesh of the belly, not too deep, ignoring the stickiness and Rosa's frantic cries.


Blood soaked his slacks and shirt sleeves and still he cut, until she was open like a melon. Then he carefully severed the membrane of the womb. Teeth clenched so hard his jaw hurt, he plunged both hands inside the gaping wound and felt until he touched something. A foot. He wanted to close his eyes, but he did not. He lifted the tiny body out and balanced it on his lap, brushing at the blood and gooiness until he could see between its legs.


"Female!" He set the baby on the lifeless form and motioned to Rosa. "Cut the cord. Finish the job, old woman."


Rosa scrambled to her feet. "She is your daughter. Your own flesh and blood!"


"I have no use for a daughter. I need a son. I need a wife to bear me sons!" he growled and stalked away, disappointment thick in his mouth.


Behind him, the baby began to cry.

R.A.Siracusa has been writing fiction and non-fiction for over thirty years. The author's debut novel, Family Secrets, pays homage to a rich Sicilian heritage. After retiring from a thirty-five year career in architecture and urban planning, Siracusa resides in San Diego and writes full time.

Visit www.rasiracusa.com for more information about the author.