Theory of the Atheist

Record One of the Alias Wars 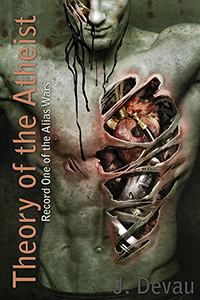 Theory of the Atheist

Record One of the Alias Wars

Gods do not exist. People are shackled by the idolized intentions of higher power. Perfection is the solution to humanity. These are the lies of the Calibration.

"Perfection doesn't come in a human shell. The Calibration will tell you that. The Calibration will tell you what you are is less—that you are flawed. But I know they're wrong. I can prove it. The only question is whether I can do it before my time runs out, and I no longer remember what it is to be human…" Enter a dystopian world where humans are given the opportunity to perfect one innate skill-set, a process known as calibration, and in so doing, they trade more and more of their humanity in their quest for perfection. This mass perfection is supposed to institute equality and eliminate conflict, concern, and judgment. But the system is far from equal. Citizens are given the "option" to assimilate within 22 years, or they are scrapped—scalped and uploaded—with the whole of their knowledge streamed into the collective and redistributed. No matter what, everyone will contribute. However, those rare few who remain uncalibrated cause uproar and chaos in the system, and while she'd like to think of herself as insignificant as she fights just to remain human, Noel Cambrian quickly becomes the spark that ignites utopia.

For a little over a decade, J Devau has been caught where reality and fantasy collide, bringing forth characters—both human and otherwise—to retell their fantastic stories. When time allows, and there are no grinning sadists, ambitious overseers, sardonic clones, or cunning dead to occupy her, Devau most enjoys sipping spearmint tea and harassing her household. Theory of the Atheist is her debut novel.