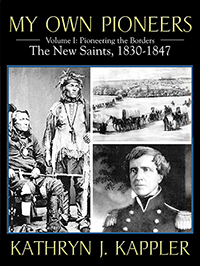 Embark on An Extraordinary Journey with My Own Pioneers!

The three volumes of My Own Pioneers together tell a remarkable story of the desperate pioneer struggles of four generations of the author’s family. Although the memorable historical journey begins seven generations ago, these three volumes of stories focus on four important pioneer generation. They are the culmination of fifteen years of painstaking research as the author carefully reconstructs her family’s pioneer struggles from before 1830 to 1918 using information from family records, journals, memoirs, histories and letters, supplemented by accounts from their pioneer companions, and by Church and other official records. Volume I tells about the author’s once prosperous pioneer families survived the French and Indian War and the War of 1812, then eventually relocated to join the newly founded Mormon Church. The stories tell how the pressure of mobs and mob wars eventually forced these families to abandon everything as they were driven from place to place, until they found themselves exiled on the western-most border of the United States—at the Missouri River—looking toward the wild and hostile West as their only refuge. Stories describe how dozens of family members were among the Mormon refugees who died by the hundreds at the Missouri River, of illness, starvation and exposure. Yet family members had managed to journey among Indians on the frontier to preach, and had sailed through nearly catastrophic ocean storms to preach in England. And despite much sorrow and hardship, this volume relates how five family members left their loved ones behind at the sickly Missouri River in order to march down the Old Santa Fe Trail in the U.S. Army’s Mormon Battalion to prove their loyalty to the government by helping to fight a war with Mexico.

Author Biography The author was born in Fort Worth, Texas, but spent her childhood and young adulthood outside the United States, in Newfoundland, France and Spain, because of her upbringing in a military family. She is a former Regent Scholar of the University of California, and graduated Magna cum Laude from UCLA with a degree in Economics. She subsequently earned an MBA with honors at University of Southern California. Throughout her life Kathryn has sustained an ardent interest in history. The author’s family has been associated with Native Americans for several generations. She has lived and traveled extensively on Indian reservations of the Southwest while researching early Native American silver jewelry. She has spent many years working with troubled horses.

Visit the author's webpage at
https://outskirtspress.com/myownpioneersI
for more information.