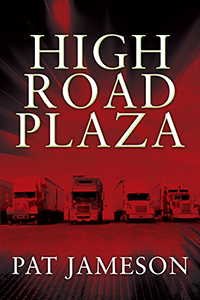 Two men, each on separate missions, have taken to the road, the interstate highway system of the United States, one from Oregon, on the run with his abducted stepdaughter, the other from Indiana, on a quest for revenge and sabotage.

Teddy Densch has just abducted his stepdaughter, four-year-old Kayla, from his Oregon home, after his wife has kicked him out of the house. He snatches his stepdaughter from school, steals his father-in-law’s RV, and heads south on I-5. Without a plan other than to make his estranged wife suffer and squirm until she begs him to come home. And Kayla is his leverage. Across the country in Indiana, Dale Elberfield, store manager at the High Road truck stop in his home town, has just been fired for sexual harassment of a co-worker, a charge that in this year of 1995 is a relatively new grounds for dismissal from the work place. Elberfield vows revenge for his unjust treatment. He will make High Road pay for this, but unlike Densch, he has a plan, to sabotage various High Road Truck Plazas across the Midwest. And also finish business with the object of his desire who got him fired, Tina Groshong. Back in Oregon a private detective, Leland Case, is on Densch’s trail, but always one step behind. In the Midwest, once Elberfield has begun his acts of mischief against them, High Road corporate has hired an investigator as well, a strange operator named Dred Sol, whose methods, as well as his character, are quite unconventional. Can they corral their marks amidst the backdrop of the vast interstate system, and the truck stops that provide its life pulse?

Pat Jameson was born in Eastern Oregon on his family’s ranch near Burns, then moved to Portland, where he lived for over forty years. He attended Santa Clara University and Northwestern School of Law of Lewis & Clark College. He worked in the automotive and truck stop industry for over forty years and published his first book in 2013. His novels include the Juniper series and Milburn Avenue. He lives in Boise, Idaho.

Visit the author's webpage at
https://outskirtspress.com/HighRoadPlaza
for more information.