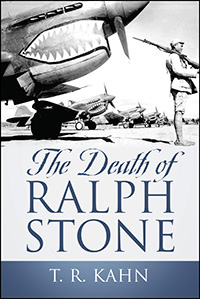 The Death of Ralph Stone

Meet Major Ralph Stone, an ace pilot for The Flying Tigers in the China Burma India Theater, and a man who knew that it is always possible to serve our values and beliefs constructively, even in the face of strong opposition.

After the armistice, Ralph continued to serve until 1947, flying for various units. He learned more about the island campaigns as the Allies fought their way, island by island, across the Pacific, toward Japan. He also learned of the firebombing of almost 70 Japanese cities before the bombs on Hiroshima and Nagasaki, and he began to question those tactics.

Ralph came to believe that there had been a significant and crucial erosion of respect for human life during the war. When he returned to the States afterward, he was asked to become part of a team of soldiers and sailors who had been recognized for their military prowess, appearing at events celebrating victory and the return to peace. He refused. Major Stone paid a heavy price for his refusal, but this is not a story of failure. The Death of Ralph Stone is the story of a man who was able to fight his part of the war heroically and still come to question the way it was won.

T. R. Kahn is a former Army aviator who served in the First Air Cavalry Division in Vietnam, during which he came to question the validity of fighting a war with no definition of victory and no exit strategy. He is a lifelong runner, a high school cross-country and track-and-field coach, a water polo and swimming coach, an active sailor who still teaches a sailing class to high school students, and the former publisher and editor of the Central Valley Christian Times. He and his wife, Marcia, have been married 61 years and have four children, 12 grandchildren, and five great-grandchildren.

Visit the author's webpage at
https://outskirtspress.com/thedeathofralphstone
for more information.