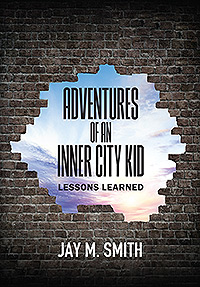 Adventures of an Inner City Kid

FROM AN AMERICAN INNER CITY, TO BOARD ROOMS, ADVENTURES BEYOND, AND LESSONS LEARNED

Jay Michael Smith is a retired insurance broker, a former banker, civil and human rights advocate, who served as the first Executive Director of Health Professions Licensing Bureau in Indiana state government. Jay took on major developmental roles at Indiana University School of Medicine and later at Morehouse School of Medicine in Atlanta, Georgia. He later finished his career as owner of Jay Smith and Associates. Jay and his wife are now involved in philanthropy activities designed to promote quality of life, educate and provide opportunities to African-Americans in need of developing their life skills. An African-American only-child born in a tenement building towards the end of World War ll and raised in the inner city by a great Aunt, a devout Baptist and domestic/cafeteria worker. He received a catholic elementary and secondary education. Jay graduated from Ball State University with a degree in business administration and from Indiana University with a master’s degree in higher education administration. Jay shares his many experiences and adventures, some humorous, but all with lessons learned. From being part of a delegation visiting a hospital for indigenousness people in Guatemala with Archbishop Desmond Tutu, listening to Nelson Mandela upon his release from prison addressing an audience at Morehouse College, to hearing the Dalai Lama share his stories and wisdom. He along with his wife traveled with People-to-People International program (a program that offers opportunities to get to know local cultures) to South Africa. Jay provides his observations of competing as well as surviving in white dominated banking, government, higher education, and insurance environments with help from people of different races and backgrounds. Jay is a recipient of one of Indiana's highest awards for his service and leadership in state government, Council of the Sagamore of the Wabash. His life has revolved around promoting education, civil and human rights, the arts, and world travel, especially among African-Americans with an emphasis on giving back to humankind.

Visit the author's webpage at
https://outskirtspress.com/adventuresofaninnercitykid
for more information.