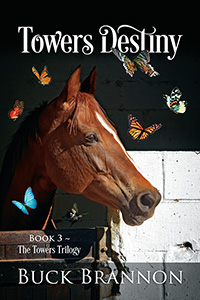 A Terrorist Threat, a Changed Identity . . . and a Legend

In the third and final book of the Buck Brannon trilogy, we are immersed once more in the thrill-ride life of dentist and self-proclaimed amateur CIA operative Dr. Rob Becker . . . and his friend Tommy, the longtime real CIA operative who would rather ask forgiveness than permission as he pushes the limits of Agency protocol. Towers Destiny opens shortly after Rob’s reconciliation with his wife Marty, as they recover from the shocking events that unfolded in Towers Above, which put both of them in the cross-hairs of Middle Eastern terrorists. Those operatives have a long reach, and when Tommy discovers that Rob has a price on his head, Rob and Marty must change their lives in ways they never dreamed of, while still clinging to the dream of owning a thoroughbred race horse that will rival the greatest ever to triumph on the race track. But the forces of evil aren’t content to just let Rob go. They develop an evil plan to flush him out by using the drug network to entrap his vulnerable grandson, Harry, who is trying to kick his vaping habit. The pressures and isolation of the COVID-19 pandemic, along with the rebellion of adolescence, create the perfect storm . . . and Harry’s life is in danger. Meanwhile, hopes are riding on Towers Above’s new foal, which is also a target for terrorist revenge. Fast-paced, well researched, and completely engaging with issues torn from the headlines, Towers Destiny is the thriller you won’t be able to put down!

Visit the author's webpage at
https://outskirtspress.com/towersdestiny
for more information.