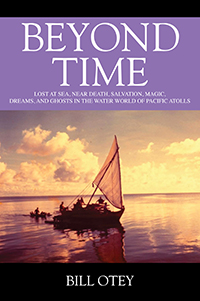 Lost at Sea, Near Death, Salvation, Magic, Dreams, and Ghosts in the Water World of Pacific Atolls

Lost at sea, near death, salvation, magic, dreams, and ghosts in the Water World of Pacific Atolls

“OMG! Evocative ... Bill, you have really captured a “time and place” in Chuuk (formerly Truk) in the early 1970s ... an extraordinary tale (beyond time” but based on real events). You’re capturing what I personally have experienced in the islands which is almost nearly impossible ... the edge of possibilities, the chance encounters, the mysteries, the paradoxes, I’m hooked ...”—Eric Metzgar.

It is the story of an adventure as it unfolded in a moment of time, in a place far away, in the Caroline Islands of Micronesia. It is a place that holds many secrets, a place unto itself, known to just a few. This story will take you there. The people are real. Some, who like a rare few, got to lead fictional lives once in a lifetime. It is the story of an incredible journey, back in time, to islands nearly beyond reach, aboard a 44-foot sail boat, and the perils of mariners who dare go there. It is the story of the Micronesian people themselves; how they arrived there millenniums ago from out of Asia, and how they persist today living by shear intelligence and guts, and a small abundance afforded on precious small atolls, and in the sea around them. It is the story of the Carolinian Navigators who knit this people into one, able to sail trackless hundreds of miles in carved canoes, without instruments, using only the powerful knowledge of stars, the sea, and the sky, passed to them unwritten from their ancestors, generation after generation, back to the beginning of their people. It is a bit of the journal of a Peace Corps Volunteer who got to live among them, as a stranger in a strange land. Who learned the rhythms of life, attuned to nature, without clocks. Beyond Time.

A boy stood on the sands of a California beach and wondered what fabulous lands lay beyond the horizon. As a man, the author followed the setting sun west to the Caroline Islands of Micronesia, as a Peace Corps Volunteer, in 1971. For his mission, he took with him some knowledge of the way of the sea learned in boats poking among the Channel Islands, and skills in the building trades learning the way of wood from his father. The experience was transformational. In 1973, the author returned from the Peace Corps, having been given much more than he gave. He was accepted into the graduate school of architecture at UCLA and thereafter, he has had a long career in the practice of architecture and raised two children, in America. He continues to practice architecture in Port St. Lucie, Florida.

Visit the author's webpage at
https://outskirtspress.com/beyondtime
for more information.