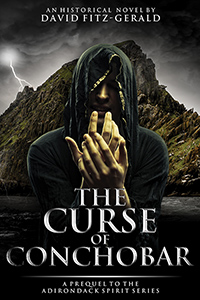 The Curse of Conchobar―A Prequel to the Adirondack Spirit Series

The Curse of Conchobar―A Prequel to the Adirondack Spirit Series

A young man is lost at sea and survives a terrifying ordeal on the open sea only to arrive in a new land with nothing but his memories.

His father abandoned him and left him with a curse. His mother gave him a name befitting a king, then died during childbirth. The monks of Skellig Michael raised him to be a pacifist and prepared him for life as a mason, not for the harsh realities of a fierce new world.

Conchobar is rescued by one village, captured by another, and becomes a pawn in their never-ending war. Banished by one, condemned by the other, he must become a warrior. In addition to the enemy villages, he must fight the curse that follows him wherever he goes. He discovers that he has the gift of telepathy. Will his extrasensory perceptions be enough to break the curse?

Conchobar must adapt or die. Evil surrounds him and there is no going back.

The Adirondack Spirit Series is an epic, multi-generational family saga, and it all starts with this ancient ancestor, Conchobar. Are supernatural tendencies hereditary? If you guessed yes, maybe you are descended from old souls too.

The year is AD 549. Start your Adirondack adventure with The Curse of Conchobar―A Prequel to the Adirondack Spirit Series.

David Fitz-Gerald writes fiction that is grounded in history and soars with the spirits. Dave enjoys getting lost in the settings he imagines and spending time with the characters he creates. Writing historical fiction is like making paintings of the past. He loves to weave fact and fiction together, stirring in action, adventure, romance, and a heavy dose of the supernatural with the hope of transporting the reader to another time and place. He is an Adirondack 46-er, which means he has hiked all of the highest peaks in New York State, so it should not be surprising when Dave attempts to glorify hikers as swashbuckling superheroes in his writing.

Visit the author's webpage at
https://outskirtspress.com/thecurseofconchobar
for more information.