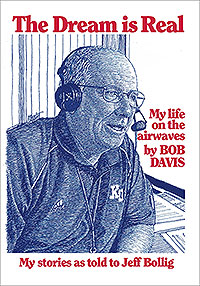 The Dream is Real

(My Life on the Airwaves)

by Bob Davis as told to Jeff Bollig

Bob Davis is a storyteller – and an outstanding one at that. For 48 years, Davis told his stories on a broadcast platform touching nearly every level of competition from high school, to small college, to large university, to minor league, to major league sports. With his distinctive deep voice tinged with passion and emotion, he told a story that made us feel like we were right there. Primarily on the radio, hearing a game with Bob Davis on the call was certain to entertain. A native Kansan, Davis has spent his entire life in the Sunflower State. A member of the Kansas Broadcasters and Sports halls of fame, he was one of the most recognized voices in the heartland. His folksy style, quick wit and engaging humor made for appointment radio and television.

In The Dream is Real, Davis recounts his award-winning broadcasting career—despite his father’s protestations that burying his nose in the Sporting News would do him no good. We follow his journey that began with ending his pursuit of a law degree, to earning his first job at KAYS radio in Hays, Kansas, becoming the Voice of the Kansas Jayhawks, and finally broadcasting his first love of baseball for the Kansas City Royals. The story is complemented by the contributions of numerous coaches, athletes, peers and others we call “Friends of Bob.”


What They Say about Bob

Ryan Lefebvre, Royals Broadcaster: “The first thing that stands out about Bob is the voice. It’s so powerful and classic.When he spoke, you could feel your ribs vibrate. That is how powerful it was.

Bill Self, Kansas Basketball Coach: “Bob is excellence. He’s the best I have heard. But he is even a better person than he was a broadcaster.”

Kevin Harlan, CBS, TNT, Westwood One Broadcaster: “Bob has the most unique crescendo of a big call that I have ever heard. But because he is a Kansan, a product of the midwest, his delivery is warm and folksy.” 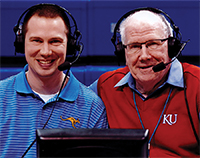 Bob Davis (pictured with son Steven, also a broadcaster) spent 48 years broadcasting sports. Jeff Bollig grew up in Hays, Kansas, and has listened to virtually every one of Bob Davis’s forty-eight years of broadcasting. The Dream is Real is his third book, including co-authoring Beware of the Phog: 50 Years of Allen Fieldhouse and What it Means to be a Jayhawk.

Visit the author's webpage at
https://outskirtspress.com/thedreamisreal
for more information.