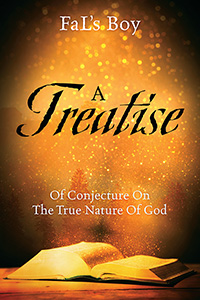 A Treatise of Conjecture on the True Nature of God

Where is there a book about God?

It you think about it, the Bible, were it a message from God, has been before most every man in history, since its humble inception. It requires focus to understand it, and not experts. It is meant for all to understand. Ecclesiastes, in the last chapter sums it up. “… of making many books there is no end, and much study is a weariness of the flesh……the conclusion of the matter, fear God and keep His commandments, for this is the whole duty of man.”

If I had one wish this treatise would do, it would be to have every African American, Caucasian, Hispanic, and whomever I may have left out, place God on their “Bucket List”. It takes awhile to get around to Him, but as you can see today, we probably don’t really have anything better to do than find Him.

I was born right before television came to the masses, at least the masses of which I was a part. When I look back, I can see through my parents how absolutely horrible it had to have been being Black at the turn of the century, during the very early 1900’s. I received what to them was exceptional treatment, along with many of my peers, because they, our parents, were elated, empowered, being allowed a tiny modicum of freedom from the tyranny of racism, and they invested their efforts into bettering their condition, but especially into bettering the lives of their children. By simply staying in the North, and gingerly tipping around the elephant of racism that stood close by every modicum of Black success, ready and certain to quash any lasting happiness, they quietly hoped to escape the madness themselves, but surely wanted their children to have the opportunities they did not have. To some degree, (to them a great degree, when they reflected on their parents and their history), their dreams came true. I went to an all Black elementary school, to a integrated high school, (15% Black), a slightly integrated college, (20 out of 1,000), and a professional school that somehow could never figure out how to graduate more than two Blacks, with the most profound expressions of exasperation on their faces. Television roared in about 1955, and in only 65 years, is here to document the “Neo, good ole boy, good old days” return, where suburbs, chalets, rural communities receive the best of schools, roads, parks, benefits, and public is the updated version of “Black only”, with outdated books, poor facilities, limited benefits for the “other”. The return to the days of overt and covert racism is being “reparadigmed” by a nebulous group called White nationalists, complete with its’ own “ism”. I knew adults who would have still thought that Black people had tales had we not met and come to know each other. Why they thought that I didn’t know then, but in this modern world of “fake news” that idea, though not particularly harmful, is apt to resurface. Through all of this, my life is not necessarily noteworthy, but the new research in Biblical history, done by younger scholars, is noteworthy to all, because it states a truth that most likely will never be again hidden. Just as the God of the Nation of Israel said, “I AM”, to Moses, We, people of color, now say that we “are”.

Visit the author's webpage at
https://outskirtspress.com/atreatise
for more information.