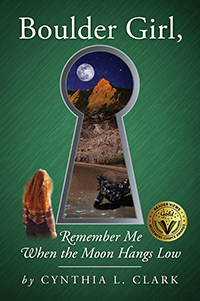 Boulder Girl, Remember Me When the Moon Hangs Low

Love story riddled with suspense in the foothills of the Rockies.

When young, pretty, successful Lana Ross divorces her indifferent husband of ten years, Cadillac dealer Lucas Chisholm, she randomly chooses a local locksmith to change the locks in her home located in Columbine Point, nestled near the iconic Flatirons of the scenic Rocky Mountains and nearby Boulder, Colorado. The selected locksmith, sinister, grimy, and smoky, Leon Alvarez, unbeknownst to Lana, was a former classmate who had been infatuated with her in high school but forgot about her when she went to college. But her renewed contact with him stirs his old feelings for her into lust and obsession and the demented belief that she will want him. After a series of calculated sinister events occur in her house, Lana asks Leon to set up a security alarm system. He uses the opportunity to place hidden surveillance cameras throughout her house to watch her in her most private moments. But his plans to win her affection are derailed when Lana meets dark and handsome Louisville Harley-Davidson dealer, Vincent “Roadking” Romano, on a writing assignment, as the editor of the Boulder Essence magazine. There is an instant attraction between them that leads to an intense and deeply moving love affair that is accompanied by their mutual appreciation of classic cars and rock and roll music as they journey beyond Boulder and Louisville to Lyons, Estes Park, Walsenburg, and Trinidad. Leon’s wrath and jealously of Roadking kindle an evil monster inside him, that he believes is love, and leads him down a path of no return that begins with vandalism and evolves into murder. Boulder Girl, Remember Me When the Moon Hangs Low, is a tale of spellbinding suspense which is interwoven with an unforgettable, compelling account of tender love set in and around beautiful Boulder, Colorado.

Cynthia L. Clark was born and raised in the shadow of the Rocky Mountains in Boulder County, Colorado, where she continues to live. The tale of Boulder Girl, Remember Me When the Moon Hangs Low had circulated in her imagination for decades before she finally put it into words. She shares a love of rock music and classic cars with the characters in the story. She earned a B.A. in Economics and a J.D. Law degree from the University of Colorado Boulder. This is her first novel.

Visit the author's webpage at
https://outskirtspress.com/bouldergirlrememberme
for more information.