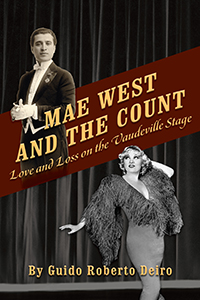 Mae West and the Count

Love and Loss on the Vaudeville Stage

Mae West & The Count takes you inside Mae’s relationship with the man who launched her career and stole her heart.

Set in the first half of the 20th Century, this is the heretofore untold story of the torrid romance, lust-filled five-year marriage, and entwined show business careers of the Vaudeville headliner "Deiro" and the "Queen of Camp" Mae West.

Unpublicized by mutual agreement, the improbable, humorous, and often heartbreaking, personal and professional relationship between the Italian nobleman, who rose to “rock-star” fame, and the Brooklyn-born fifth-grade dropout who became a show business legend and an icon of sexual freedom, is intimately and elegantly exposed in this volume.

"I couldn't help myself – “D” was an amazing lover. The sex thing was terrific with this guy. I wanted to do it morning, noon and night, and that's all I wanted to do. “
-Mae West, Goodness Had Nothing to Do With It (1959).

“It went very deep, hittin' on all the emotions. You can't get too hot over anybody unless there's somethin' that goes along with the sex act, can you?"
-Mae West, Goodness Had Nothing to Do With It (1959).

Retired after successful careers in casino gaming, aviation, and real estate sales, Guido Roberto Deiro resides with his wife, Joan Marlene, at their estate Villa Kismet in the outskirts of Las Vegas, Nevada. The writing of Mae West & The Count – Love and Loss on the Vaudeville Stage came about because of an instruction given to the author by his father, Count Deiro, shortly before his father's demise: “Never forget that I introduced and made popular the piano-accordion, and tell everyone, including someday your children, who I was and what I did with my life. And if Mae West ever says anything to you, I want you to listen to her…she could have been your mother.” The author hopes that the publication of this biographical novel meets his late father’s imperative.

Visit the author's webpage at
https://outskirtspress.com/maewestandthecount
for more information.