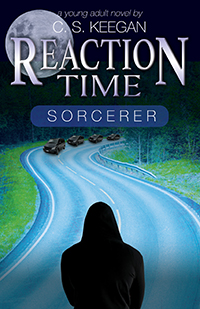 Seventeen-year-old Megan Bennett has survived being hunted by killers, being kidnapped and threatened with rape, mayhem, and murder. She’s been shot at and stabbed, and discovered that her friend, Nick, really is her brother, which makes her also a genetically altered human. She’s fallen in love, only to find out that she was in love with someone else, and the girl she thought was trying to steal her boyfriend ended up her best friend. Clearly not the greatest two years in high school. Now Nick wants her to find his missing sister, Dannie. Nobody knows why she left home. Did she run away with an unknown lover, or is she running for her life? Have the Dark Wolves caught her? Is she dead or alive? Can they find her in time? And if they do find her, what will they find? Megan and Lucas, along with Jim and Jasmine, must go to Southern California. From the moment they arrive at Dannie’s home the shocks start coming. A Wolf had been at the door the day before. Dannie’s three friends are also missing, and they need to find them to find her. When the body count starts rising they know the Dark Wolves are on the hunt as well. If they don’t find Dannie’s friends before the Dark Wolves do, they’re dead. Megan’s bond with Lucas has increased her Wolf abilities over the past year and the change seems to be accelerating. But as her powers grow, she’s beginning to suspect Lucas is keeping things from her, and she can’t help wondering if her brother isn’t playing her again. This is the third crisis point for Zander, leader of the Dark Wolves. But it is also a crisis point for Megan and something tells her only one of them will come out of it alive. Reaction Time—Sorcerer is the last in a three book series concerning the results of genetic experiments on human embryos. Evolution has already produced rare individuals with bone density eight times normal and others whose blood chemistry produces superhuman muscle strength. Throw in a sociopathic geneticist who thinks the brain can also be improved with a little trial and error and you get Wolves, a breed of humans with strength and speed, radically heightened senses and a pack instinct right out of the dawn of history. What could go wrong?

Visit the author's webpage at
https://outskirtspress.com/reactiontimeseries
for more information.