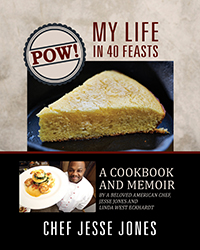 “‘POW! My Life in 40 Feasts’ is so much more than a cookbook—it’s the actual celebration of Chef Jesse’s way of life…through delicious food. We are all so fortunate to take a peek into the life of one of America’s finest chefs and, more importantly, to share a little of his bon vivant personality.” —Thomas Griffiths, CMC, Campbell’s Global Culinary Institute “Chef Jesse is the real deal - a loyal friend and family man whose cooking sings with stupendous flavor and authenticity. I intend to cook my way through the whole book.” —Nick Malgieri author of How to Bake and PASTRY Chef Jesse Jones’s story is honest and heartfelt as he describes how the kitchen saved him from the streets. He grew up in Newark, New Jersey, and summered with his grandparents in North Carolina, then trained in a great French restaurant. When he used his hard-won French technique to make Southern fried chicken, then served it alongside his sweet potato waffles, all his diners could say was POW! Chef Jesse is a gifted American chef who has owned his own restaurant, cooked in five-star restaurants, and chefed for celebrities who have become lifelong friends. He cooks it low and slow, or fast and furious. But regardless of the technique, Chef’s food is always delicious. This collection of 40 feasts will give you party ideas all year long. For beginners and experts alike, cook with Chef Jesse and soon you’ll be saying POW! 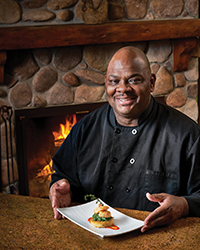 Chef Jesse Jones lives with Annette, his wife of 30 years, in South Orange, New Jersey. They have two sons, Tristan and Jesse, both college graduates. Tristan is an artist, and Jesse is seeking a professional basketball career overseas. Linda West Eckhardt, Jesse’s friend and coauthor, is an award-winning cookbook author with more than 35 books. She holds the coveted Julia Child Award from the International Association of Culinary Professionals and two James Beard prizes for cookbooks as well as one for radio work. Ms. Eckhardt earned a BS from U.Texas in Plan II Foods and Nutrition, and an MA in English, Creative Writing, from San Francisco State. POW!

Visit the author's webpage at
https://outskirtspress.com/powmylifein40feasts
for more information.