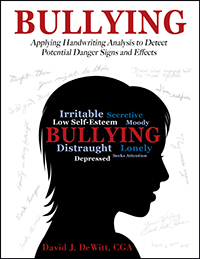 David DeWitt has done it once more! In his latest book, “Bullying…Applying Handwriting Analysis to Detect Potential Signs and Effects”, David DeWitt puts forth a timely hypothesis that carries great import for contemporary American society. As a certified Graphoanalyst, David DeWitt has spent a lifetime studying the link between human behavior and handwriting. This field of endeavor is referred to as Graphology and is a science unto itself. I have personally witnessed this man as he applied his extensive knowledge to analyzing the handwriting of interested volunteers ...and the results of his findings were incredibly accurate! The individuals involved were, to a person, amazed by the insights that he garnered based upon their handwriting samples. Above all, David DeWitt is a humanist of the highest caliber and his altruism has inspired him to deploy his unique skill set for the betterment of mankind. On October 7, 2003, young Ryan Halligan’s life ended as a result of recurrent bullying by his peers. John Halligan, Ryan’s father, has since made it his mission to speak out publicly against bullying and to alert people to its many and varied warning signs. Having met Mr. Halligan personally, David DeWitt was touched by Ryan’s tragedy and was compelled to marshal his graphoanalytic talents in the war against bullying. In his newest work, “Bullying…Applying Handwriting Analysis to Detect Potential Signs and Effects”, David DeWitt methodically exposes the reader to the links between handwriting and possible aggressive and dishonest behavior. This book is not just for parents ...we are all involved in the battle against bullying. I endorse David DeWitt in his literary efforts and highly recommend this book to you. Simply stated, this is a must read. —John De Mado, John De Mado Language Seminars, LLC Author/Houghton Mifflin Harcourt, McGraw-Hill, Pearson 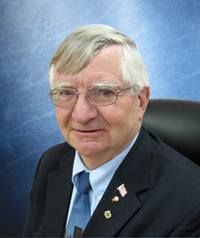 David J. DeWitt is a professional Graphologist and a certified Graphoanalyst. He is the author of the book, “Handwriting Analysis… Discover Your Own Vocational/Career Potential”, a guide to discover 40 jobs to fit your personality, published by Outskirts Press, Inc. Since his early years in the US Army, he has been lecturing publicly on handwriting analysis to organizations, clubs, schools and colleges by demonstrating and showing how you can get a grasp of the fundamental rules of handwriting analysis and find out about yourself and others. His new book represents his same easy step-by-step approach in spotting projective behavioral patterns in handwriting in the same way that body language expressions are evident. With the help of graphology, he seeks to provide insight and an additional screening tool for bullying behavior prediction from handwriting to complement traditional approaches. Mr. DeWitt is retired from a successful career as a Nationwide Insurance Agent. Mr. DeWitt is also a: Board Certified Graphologist by the National Society for Graphology Certified Graphoanalyst by the International Graphoanalyst Society Member of (AHAF) the American Handwriting Analysis Foundation Member of (IGAS) the International Graphoanalysis Society Member of (CAPA) the Connecticut Authors & Publishers Association Retired President Club Nationwide Insurance Agent, CLU, CPCU, LUTCF

Visit the author's webpage at
https://outskirtspress.com/bullyingapplyinghandwritinganalysis
for more information.