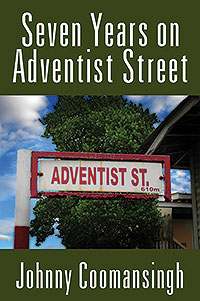 Have hope. Written especially for youth everywhere in any station of life, Seven Years on Adventist Street distills hope…hope for all; all who think that they are living under the worst of circumstances. Seven Years on Adventist Street dissects, analyses, and synthesizes the impact of cultural forms on a young boy’s mind during the period 1960–1966. The narrative provides a window into the societal structures that fashioned his belief, his positive outlook, and his anchor of hopefulness as he journeys through life. On any given street in Trinidad, an individual could find an array of cultural variables similar to that of Adventist Street. Despite this fact, Adventist Street is unique. His emic view of Adventist Street as place, establishes the great value he has ascribed to this street in directing his intellectual leanings and perception of the world. Part of his soul is everlastingly entwined in the noise of the street-scape. More than any other place, he identifies with Adventist Street, and sadly, could offer no explanation for the placelessness of the basin in the Guaico River where he used to fish; no one fishes there anymore. In such a cultural melee, he was able to find a compass, and subsequently, chart a course for life. Seven Years on Adventist Street characterizes the play and interplay of people and their roles, rituals, and religion in the creation of a community. In his poverty-stricken world during those early years, he became a literal forager of sorts in his immediate environment and was able to sometimes fend off his physical hunger. Nevertheless, the hunger for intellectual stimulation and development was ever present. Written on the wall of his elementary school was the proverb: “The fear of the Lord is the beginning of wisdom, and the knowledge of the holy is understanding.” Taking this bit of biblical scripture as his guide, he purposed in his heart to keep focused on the goals that would emancipate him from the shackles of rebuff, ridicule, and want. Seven Years on Adventist Street reveals a fulfilling story of hope, prayer, perseverance, and providence.

Visit the author's webpage at
https://outskirtspress.com/sevenyearsonadventiststreet
for more information.