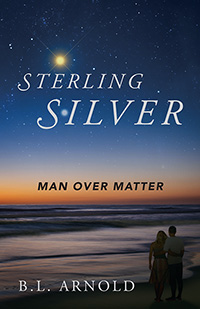 A compelling story of love at first sight

Sterling Silver is best described as a man’s man—self-confident, athletic, talented, and extremely handsome. Despite all he has going for him, he is not conceited or rude to others, and both men and women, young and old, are instantly captivated by his charming personality and good looks. From the time he was a teenager, Sterling’s goal in life has been to become rich and powerful. Life has been good to him and all is well in the Silver household until the day he learns his parents are separating. The news devastates him, and he immediately swears off any and all romantic commitments until he reaches his goal. He promises himself he will never tear his family apart the way his father has. Over the next few years, many women try their best to break through the barrier that keeps Sterling uninvolved and unattached. And when they become too persistent, Sterling walks away—sometimes with a little help from his mother, who is always eager to help him get rid of anyone standing in the way of his bid for money and power. But Sterling is about to meet the one woman who might make him lose his grip on the “no commitment” code. He’ll have to slow down his heart, reminding himself that he has not yet reached his goal… Or will he decide he’s close enough and let love into his life? Sterling Silver conjures emotions that come straight from the heart in this eloquent debut novel about love and the pursuit of happiness.

Visit the author's webpage at
https://outskirtspress.com/sterlingsilver
for more information.