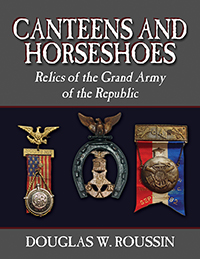 Relics of the Grand Army of the Republic


In the 83 years following the American Civil War, a powerful organization known as the Grand Army of the Republic dominated the life of the Civil War veterans. Founded in 1866, the organization’s membership peaked in the 1890’s, with nearly 450,000 veterans. In 1949, the last surviving members disbanded the organization and it became history. The organization was all but forgotten except by Civil War enthusiast, historians and collectors of Grand Army of the Republic memorabilia. During its existence, the Grand Army produced souvenirs in the form of badges, canteens and good luck horseshoes. “Canteens & Horseshoes,” is an in depth study of what the veterans left behind. This volume containing approximately 280 colored photos of Veteran’s badges, miniature canteens and canteens used to hold the veteran’s liquid of choice, “whiskey.” Their motto, “We Drank from the Same Canteen” had real meaning to the veteran. Along with canteens, this study contains a large variety of little known, and often overlooked, decorative horseshoes which the Civil War veteran proudly displayed in his home. After nearly 60 years of collecting, researching information at numerous museums and conversing with other avid collectors, I have compiled and cataloged this study on Grand Army canteens and horseshoes. This study will give the novice and advance collector a better understanding of what can be found on the collecting market. The last remaining veterans never realized how fascinating their souvenirs would become to future generations. 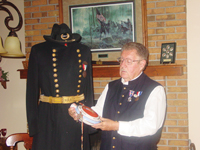 Douglas W. Roussin has been collecting and studying Civil War and Grand Army memorabilia for nearly 60 years. This is his second book on GAR memorabilia. Doug is a current member of the Civil War Veteran Historical Association and present Camp Commander of the Sons of Union Veterans of the Civil War. He enjoys relic hunting, traveling, gardening and antiquing with his wife Kathie.

Visit the author's webpage at
https://outskirtspress.com/canteensandhorseshoes
for more information.