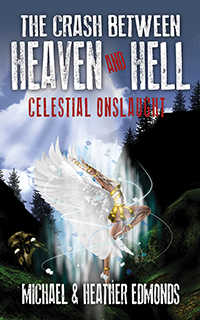 The Crash Between Heaven and Hell

Can Seven Strangers Save a Post-Apocalyptic World?


The apocalypse has devastated humanity, leaving only a few survivors in a dead world. But in the midst of the political and environmental ravages of the earth, there is a glimmer of hope. Angels have been sent to redeem the world from evil, but they need help from the Pure-hearts…people left on earth who have the strength to resist evil and lead others to the light. Seven people are key to this effort of salvation. They come from different places in the world, and different backgrounds. They don’t know each other, but they are thrown together and must learn to work as a team in order to reach their goal despite being persecuted by an army of evil. A harbor master, a priest, a Vegas mob boss, an assassin, an angel, and two unique children must learn how to overcome their personal and cultural clashes, as well as dealing with their own emotional trauma and the stress of continually fearing death. Will this unlikely group prevail, or will the powers of evil successfully take the last ounce of good on earth to the depths of hell? The Crash of Heaven is the first book in a compelling series that will have you on the edge of your seat from the first page to the last.

Our new website is currently open. Get updated news, short stories, illustrations and more. Click below to visit!

The Crash Between Heaven and Hell

Michael and Heather Edmonds met in college. They now live in Colorado with their four children and two dogs. They have been together for more than a decade, and share a passion for education, writing, art, myths and superstitions, camping, and movies. Their favorite running joke is the impending "zombie apocalypse" and their "zombie plan.” The Crash of Heaven is the couple’s first book together. Their creativity is inspired by the unique qualities each of them brings to writing: Mike is the expert crafter of horror and oddities, while Heather brings depth, humanity, and romance to the characters and their stories. They plan to continue their successful collaboration and look forward to publishing the next book in the series.

Visit the author's webpage at
https://outskirtspress.com/thecrashbetweenheavenandhell
for more information.