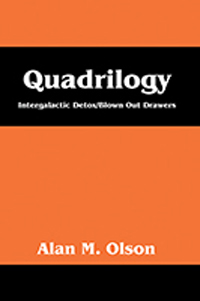 
What's that in the sky? It's a bird...it's a plane...No! That piece of junk is the 'Intergalactic Detox.' Yes, my friend, welcome to this 2442 nightmare. You can get lost in space, and somehow still be in space ad perpetuity. But wait. It's a dead tie in the election on earth, and with but 2 measly electoral votes, the bums living on the asteroid belt, where the precincts close six hours later, will cast the deciding votes and decide who will become the new president elect. On the other side of the coin, you have just married the girl of your dreams, who you don't know anything about as of yet since you've only talked eleven sentences to her. She's hanging out with two half bearded bums, who follow her around as though she's a rock star; and for some odd reason, they have drawers built inside of them where she ignobly tosses a ratty blonde wig she was wearing the previous evening. You may be in love, yet you also may encounter, along the way, some 'Blown Out Drawers.' Soon the Beardos have been sequestered into two large dice and are, like tumble weed or rolling stones, bouncing down the hills of San Francisco. When all's said and done, will the Beardos be able to read their own spots or is the vast array of feckless human rabble involved in an inveterate coup, not knowing they are chronic gamblers? Join the retarded insanity as nothing makes sense, not even a broken piggy bank.

Alan M. Olson got a B.A. degree from the University of Minnesota in 1985, and has spent most of his adult life writing stories amidst a handful of hideous jobs. He has written stories about chronic narks, as well as fantasies about cows flying and the importance of protecting the environment. He now lives in Minneapolis.

Visit the author's webpage at
https://outskirtspress.com/quadrilogy
for more information.