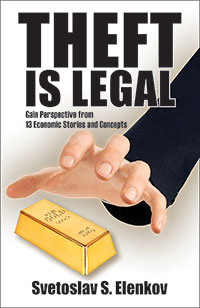 The Realities of Economic Terror


Those of us who have always lived in America speak of the economic “crashes” our country has experienced and survived. However, we have never experienced genuine economic collapse, or the terrifying reality of a country where central banking and inflation have led to anarchy. Author Svetoslav Elenkov gives a uniquely valuable first-hand account of life in a country torn apart by economic disaster, and shows the connections between money, central banking, inflation, and the real impact on everyday people of corrupt and short-sighted government policies. Experience what it is like to live in a world where violence erupts as protests are ignored; where the powerful send men armed with shields and batons to assault citizens innocently celebrating at a party. Immerse yourself in a world where government buildings are attacked, where AK-47s open fire, where RPGs wreak havoc. Learn about what causes these extreme conditions, and what we, as citizens, need to know about both prevention and survival in a worst-case scenario.

Svetoslav Elenkov grew up in a country torn by political turmoil. After immigrating to the United States, he has been dedicated to investigating and understanding the reasons that led to his country’s economic collapse.

Visit the author's webpage at
https://outskirtspress.com/theftislegal
for more information.