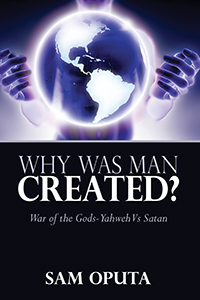 
Before they re-engineered man, they were living here on earth by themselves for eons of years. They decided to "let Us create man." But WHY? Most people have at one time or another asked themselves, Why am I here? What is my purpose? It's a difficult and profound question, and a common conclusion is that we were created for God's glory. This may be true, but it is not logical. There must be a far more specific reason for our creation. This work is a navigation and connection of dots to understand creations/evolution through the sciences, psychology, geology, anthropology, religion and mostly through the Holy Books which harbor mountain of misunderstood scientific evidences. This work did not shy way from misunderstood myths of the Annunakis who some know as the watchers or the angels. I will want to think that the sciences in the Holy Books are either not understood for what they are or are simply misinterpreted. This author borrows extremely from narrations in the Holy Books as recorded in narratives and from other sources as narrated in folklore, other authors and geological/anthropological findings. This book redefines days and nights especially when applied to creation. "And God called the light Day, and the darkness He called Night. And the evening and the morning were the first day." Genesis 1:5 describes the first day as happening even before the earth is formed. This tells you immediately that The All-Powerful Creator is not stating earthly days. How can He, when the Earth was not in existence? The Book of Genesis if properly read and understood, contains information most people will never see. You cannot even start to think about something that you don't understand but when such puzzles are explained, they no longer appear to be mysteries. Just like the Book started as "In the Beginning..." so also the Book has given us "In the end..." It is hard to see this information just like it was difficult to find the Big Bang in those Biblical first few words. Though, the book of genesis was not the big bang of this book, that we gleaned new information from it, is satisfaction enough. A simple arithmetic manipulation brings to light some hidden information in the book of Genesis. The simple arithmetic was performed in this book but you need to read the details and apply it to fully grasp how it works. "Why are we created?" will also explain in simple terms why man was created and for what reason and purpose. You will be shocked to finally come to terms as to why Man was created.

Visit the author's webpage at
https://outskirtspress.com/whywasmancreated
for more information.