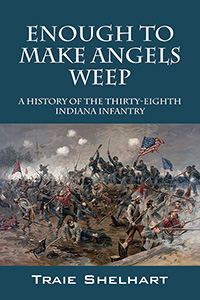 A History of the Thirty-Eighth Indiana Infantry

The human carnage at Perryville dominated the landscape north of town

“Enough To Make Angels Weep” takes an objective, in-depth look at the Civil War service history of the Thirty-eighth Indiana Infantry, a regiment originally raised from local militia groups in counties across southern Indiana in 1861. This narrative focuses specifically upon the activities of the common “western” soldier within the Thirty-eighth’s ranks, including camp life, adventures on the march, and the extreme hardships they suffered during active campaigns. Nicknamed “the double-backboned Hoosiers” in early 1862 because of their ability to endure long, arduous marches, the men of the Thirty-eighth Indiana also participated in some of the most vicious and bloody battles and campaigns of the Civil War’s western theatre. From the carnage wrought upon the rolling hills north of Perryville, KY in October 1862 to General William T. Sherman’s decisive onslaught through the deep South in 1864-65 during the battles for Atlanta, the March to the Sea, and the Carolinas Campaign, the fighting spirit and determination of the Thirty-eighth Indiana endured, despite the regiment leaving its honored dead in 10 states spanning 33 different skirmishes and major engagements. The resilience and fortitude of these men, most straight from the farm fields of southern Indiana, clearly resonates to the reader as this narrative follows their transition from shiny, new recruits at the outbreak of war to grizzled, hardened veterans by war's end.

Carl “Traie” Shelhart is a 2001 graduate of Grand Valley State University in Allendale, MI. Traie has maintained a fervent passion for 18th and 19th Century American history, specifically the Revolutionary and Civil War periods, throughout his years spent as a field archaeologist, state park ranger, and medical assistant since his graduation from GVSU. Traie has also spent fifteen plus years as a Civil War living historian, first with Co. D, 38th Indiana Infantry and most recently with Co. K, 5th Michigan Infantry. “Enough To Make Angels Weep” is his first historical narrative. Feel free to contact him at traie38@yahoo.com with questions, comments, or further information.

Visit the author's webpage at
https://outskirtspress.com/38thindiana
for more information.