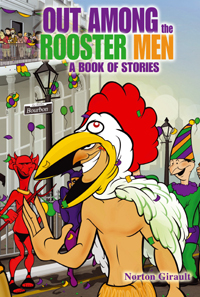 Out Among the Rooster Men

A Book of Stories

Norton Girault is a master of the short fiction genre. His stories demonstrate a complexity of tone—comedy, humor, and irony—to support themes that span the decades of the 20th century: the perennial struggle of the artist; the consequences of war; misguided heroes; and the difficulty of human relationships, both in love and between the races. • In “Out Among the Rooster Men,” a young man is conflicted when he witnesses his father’s confrontation with his uncle, who has driven a black hired hand off his Texas ranch with a shotgun. • “My Name is Chu Myong Suk” is set aboard a minesweeper during the Korean War and tells of a North Korean officer being interrogated and tortured for information on a minefield.” • In “Hands,” a retired chief boatswain mate dog-naps a seeing-eye dog that he believes is being abused by its sadistic blind owner. • “Crazy on the Batture” is about a young black woman and the young white painter who persuades her to pose for him on the banks of the Mississippi River in the early 1940s. • Set in Washington DC in the 1970s, “The Souvenir” reveals the conflict between a WWII father and his Vietnam War veteran son. • In “You Must Remember This,” a Navy nurse Lieutenant, who appears in an earlier story in the collection, recalls and reevaluates the experience of kissing her enlisted Phamacist’s Mate assistant, who served with her in air evacuating the wounded from Iwo Jima. These are just a few of the stories offered in this treasury—a collection with tremendous range, depth, and a common thread of theme and character.

Born in New Orleans, Louisiana, Norton Girault got his BA and MA in English at LSU. He served on cruisers and destroyers in World War II and the Korean War. He retired from the Navy in 1969 and taught English at Norfolk State University for 15 years. His poetry, fiction, and essays have appeared in Soundings Review, The Crescent Review, MSS, Snake Nation Review, Webster Review, Timbuktu, Old Dominion Review, and other magazines. He has been a regular contributor at the Bread Loaf Writers’ Conference since 1974. Since 1974, he has also taken writing courses in the Old Dominion University MFA program in Norfolk, Virginia, where he now resides.

Visit the author's webpage at
https://outskirtspress.com/outamongtheroostermen
for more information.