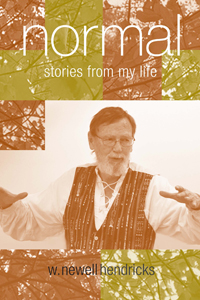 Stories From My Life


I always told stories to my kids when we were camping, or in the car, or any chance I could get. Many of those stories were about my life in the 60's. For me, that decade was not about "drugs, sex, and rock and roll" but was about the Vietnam War, which forced the issue of morality on a generation of us. The word "normal" contains the word “moral." I think it's normal to be moral, and in a way that's what the book is about: my attempt to live a moral life. I pursued my individual idealism through composing music and found ways to survive without having to give my autonomy over to either the government or the private sector. By the end of the 60's, I had lived in two "communes" which were heavy into the drug culture (although I wasn't), had received nine draft induction orders, had been in jail three times for minor infractions, had hitch-hiked at least fifty times on trips over a thousand miles, had lived one year in an industrial park area, lived one year outside under a tree, and one year in a fixed-up chicken coop. Whether living in the counterculture world of the 60's, raising a family, dealing with the professional world of opera companies, building houses, or looking at the world through the eyes of Nicaraguan campesinos, I have tried to continue that basic life choice - to live a moral life. And it's been a wonderful life. I was not a rebel; I was an idealist who found resources within myself, in the natural world, and in the dumpsters of society to not only exist, but flourish.

Newell Hendricks, as an opera composer, received two National Endowment for the Arts fellowships and a grant from the Massachusetts Council on the Arts to write an oratorio: El Salvador: Requiem and Invocation, with poet Denise Levertov. In honor of his 50th birthday, Richard Dyer, reviewer for the Boston Globe, wrote a feature article on him with the headline "An interesting and productive career outside the mainstream." This headline would equally apply to his later work leading popular education style workshops, his homesteading activities, or his political activism. Newell lives in Cambridge, MA, with his violinist wife, Barbara Englesberg. They have two adult daughters, and two granddaughters.

Visit the author's webpage at
https://outskirtspress.com/anormallife
for more information.