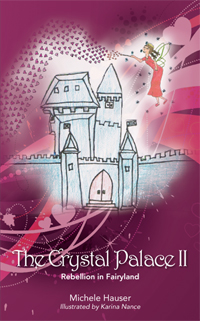 Grammy finds a tiny envelope addressed to Karina on the crystal bed. Karina and her friends have been invited to the fairy Prince Jeremy’s third birthday party. Grammy’s tooth fairy, Angela, leads Karina, Katie, and Nicole back to Fairyland through the bedpost crystal.

The royal celebration is beautiful and festive, a magical and enchanting evening in Fairyland…

Suddenly, explosions interrupt the celebrations. In the chaos, Karina, Katie, Nicole, and the young, insolent fairy princess Gianna are kidnapped.

Karina and her friends find there is trouble in Fairyland as they confront issues of injustice and inequality and work together to find a solution.

Enchanting and fanciful…a child’s vision of Fairyland through the illustrations of Karina, the ten-year-old granddaughter of author Grammy Hauser.

About nine o’clock, the bedpost crystal began to softly glow. The girls were laughing and talking so much, they didn’t even notice at first. Gradually, the light grew brighter, and Nicole saw it and gasped.

“Look!” she exclaimed in disbelief.

Katie and Karina began jumping up and down with excitement. Nicole furrowed her brow and moved closer to the crystal. She peered into it and saw something sparkly twirling around and around inside.

“It’s sparkling in there,” she commented quietly. She didn’t really believe that a fairy was coming, but she didn’t know what else it could be.

Suddenly, a light shot up toward the ceiling, followed by a shower of sparkly pixie dust that swirled and floated back toward the bedpost. Before long, as the pixie dust cleared, even Nicole could see the little fairy standing on the bedpost. She had blonde hair tied up in a pony tail on one side of her head, with flowers on it. Her ears were pointed, giving her the look of a pixie. She wore a tiny apple green outfit with a silky top sprinkled with multi-colored flowers, and a flowing skirt that fell gracefully to the uneven hem. Her shoes were green and curved up above the toe, like something from Aladdin. Transparent wings arched up behind her, and fairy dust sparkled around her. She held a wand that seemed to glow with more sparkles.

“Whew! I made it,” said Angela. Then she looked at the girls and smiled, “It’s good to see you again.”

“Hey, Angela. Thanks for the invitation. We can’t wait to go back to Fairyland,” said Karina.

“I see you have a new friend with you. What happened to Emily Jean?”

“She moved, so we invited Nicole. Is that okay?” Katie asked hopefully.

Nicole just stared, with her eyes bugged out and her mouth hung open. This was not possible.

Karina nudged Nicole, who startled and said, “Oh, thank you. It’s…uh…amazing to meet you too.”

“You do too, Angela,” said Katie. “I love your green flowery outfit.”

“Thanks, I have to wear my best for a royal celebration, you know.”

“Well, we’d better get going,” announced Angela. “First, let’s get you fairy size, so you’ll fit in the crystal.”

“I remember,” Katie piped in. “Use Incantation #3!” She smiled proudly that she had remembered.

Angela waved her wand as she recited the size adjustment incantation. The girls felt a tingle throughout their bodies as the bedpost seemed to rise up before them. Now, they were standing on the bed, looking up at Angela on the crystal.

“Oh,” cried out Nicole, “what happened? Did we shrink?”

“Of course,” responded Karina, “we are going to Fairyland, you know.”

“Now hold hands, girls,” ordered Angela. Then she grabbed Karina’s hand who held Nicole’s hand, who held Katie’s hand. Angela flew with them up into the air, then down toward the crystal. Karina and Katie knew it was like a bubbly water slide, but Nicole cringed and winced as they got near, afraid of hitting the hard crystal. She was relieved and delighted with the wild ride through what seemed like a glass tube; it reminded her of a ride at Six Flags.

When Angela and the girls swooshed out of the tube and onto the ground, a great cheer rang out. All around them were what seemed like hundreds of fairy folk: elves, fairies, pixies, and brownies. They shouted an excited welcome, and some held large banners reading, “Welcome to Fairyland” and “We love you” and “Welcome to the Prince’s Rescuers.”

Katie and Karina waved back enthusiastically; Nicole stood quietly, looking as if in shocked disbelief.

“I know it’s hard to believe,” added Karina, “but ‘seeing is believing’…here it is: Fairyland!”

Michele Hauser was an elementary and middle school teacher for thirty years. She is a UCLA Writing Project Fellow, a member of Association of Children's Book Writers and Illustrators, and California Readers, an organization which strives to connect authors and children through classroom visits. Michele holds a Master of Arts degree in Education, with an emphasis in Reading and Writing.

She has two sons and six grandchildren. With her husband Steve, Michele lives part of each year in California and Illinois. 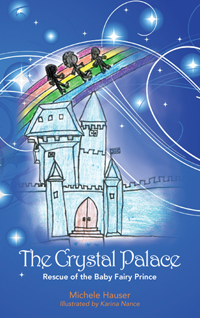 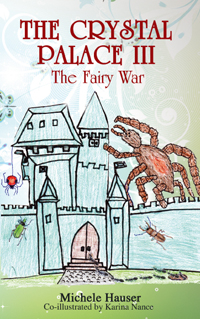 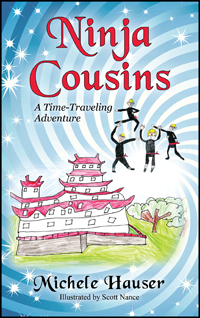