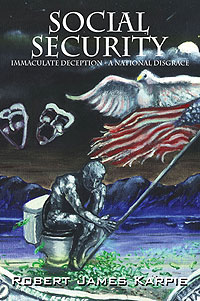 Four old codgers are sick and tired of the abuse and neglect which occurs daily in their old-folks-home. Max has a broken leg for getting involved as he tried to help his buddy Thomas with his bed pan. Unfortunately, Thomas is now in the intensive care unit at the county hospital. He’s in a coma. Another resident, Marge Taylor; has been repeatedly beaten and raped and hasn’t spoken a word since her tragic ordeal started. She was too afraid to report her cruel and inhumane treatment.

Loss of morale dictates as anxiety and pessimism have set in to say the least; thanks to the agony and shame that has been inflicted upon them by the so called system. Eventually, the shit hits the fan in protest and arrest. The press is having a field day, the old folks are demonstrating and the Four Amigo; Clarence, Max, Sarge and Henry are playing cards, conspiring to overthrow the system and make change by taking matters into their own hands as they vow to conquer Hell --- Prudent-Paradise.

They actually hire a lawyer, Chi, Clarence's grandson who sues the state as well as the owners of Hell. The residents go wild with the idea and unite as they pool their resources and purchase Prudent Paradise in the Name of Love. They change its name to Social Security and become one big family; with a bar, pool, hot tubs, pets, the O-zone, and a Laugh Room. They learn to live and enjoy life again as sex is on their minds.

Clarence and his Amigos have their hands full. Sometimes he wonders if they bit off more than they can chew. He falls in Love which seems to be contagious. Unfortunately, life is dangerous. Together, they continue to address uncertainty as they confront destiny; in spite of its ups and downs. Their goal is to make change; before it’s too late and out of control. Thus, they devise a plan to challenge the troubles that are plaguing America today; which most citizens choose to ignore as the ‘Elite Powers That Be’; herds us like cattle into organized chaos.

This Novel is a little obscene, dramatic, provocative, and educational through a historical review, including several unnerving National Disgraces which have infected the world; but were covered up in the Name of National Security. On a lighter note, it is also funny as well as bitter-sweet and a bit violent but then again, that's Life. For as Mark Twain proclaimed:

“Man is the only animal that blushes, the only one that needs to.”

Hence, you will laugh and you will cry, but my aim is to STIMULATE your brain, connect the dots; so to speak and make you think. This is but a Wake-up Call. Frankly, the system itself is consuming the consumers. We are becoming slaves economically as our Individual Rights & Freedoms are cannibalized from within by own government; an Immaculate Deception

Unfortunately, Americans have lost their faith in our government as well as our system of justice and the rule of law? Wake up my fellow Americans; it is time to support and defend the U.S. Constitution! United, it is time we implement the system of ‘Checks and Balances’; which were designed by our founding fathers as they established a ‘Separation of Powers’, on purpose.

Ultimately, the ‘Power’, was designed to be shared between our three branches of government and each branch has the right and the duty to challenge the actions of the others; a safe guard to prevent excessive power grabs by either the judicial, legislative or executive branch of our government. Ironically, our forefather’s greatest fears are coming true? Why? Because --- ‘We the People’, have fallen asleep. We have forgotten about the ‘Power of the People’; our Duty to Question Authority and Demand Answers. We should not fear our government; they should fear us, We the People!

Alas, God help us if we laugh now and cry later. Especially since Life is a matter of Good verses evil. Ironically, Truth is akin to Cool, as both are Repulsive to the Un. But, when ignorance is ignored, stupidity is justified. It’s Time To Open Your Eyes & WAKE-UP!

New book Social Security is a Wake-Up Call. It Questions Authority; as ‘Concerned Citizens’ get Involved and Address the Immaculate Deception that is plaguing America today, including the History of the Swine Flu ‘plausible scenario’… Get some startling Historical Facts before you Act on the so called ‘imminent pandemic’ --- A Warning that was issued by the World Health Organization.

Tamiflu and Swine Flu terror - Propaganda from friends in Washington and other high places to instill a scenario of panic by fear-mongering…. US Government health officials are planning to spend up to $2 billion to buy about 160 million doses of vaccine for the ‘Fall’ of 2009 – ‘ Winter’ of 2010, to prevent Swine Flu.

In 1976 Several older people died within hours, after taken the shot; from heart attacks. There were also reports of the vaccine touching off neurological problems, especially rare ‘Guillain-Barre’ syndrome. Eventually, the government suspended the program, after inoculating 40 million people for a flu that never came.

Do You See a Pattern Here? This is the third time that the same group of people imposed this threat at the expense of the taxpayers. It’s Time To Open Your Eyes & WAKE-UP!

Social Security will STIMULATE your brain, connect the dots; so to speak and make you think. This is but a Wake-up Call. Frankly, the system itself is consuming the consumers. We are becoming slaves economically as our Individual Rights & Freedoms are cannibalized from within by own government; an Immaculate Deception.

Ironically, Truth is akin to Cool as both are Repulsive to the Un. But, when Ignorance is Ignored; Stupidity is Justified

...it is our Duty to get involved and make a difference before it is Too Late. All of us must unite, organize and fight for our God given fundamental rights, liberties and freedoms by taking a stand together. We must reposition, restore, preserve and ensure America’s solvency or Answer to our Children. Frankly, our government is full of crap. It stinks and it’s time to change the dirty diaper. It’s time WE get rid of all the Shit!

We owe it to God, to ourselves and to each other. Until then, Life as we know it --- Is what it Is; as we settle for the consolation of HOPE. But, ‘Peace Is Within’ all of Us! Mankind controls his own destiny - Collectively. 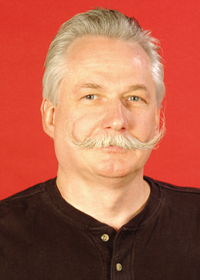 Robert James Karpie is a student of the human condition, wielding the written craft to enrapture the mind much like an artist wields a brush. The pages are a blank canvas on which to draw from a talent heralded by many and matched only by an imagination that rises to the task. Social Security is but a Wake-up Call. It proclaims that: Truth is akin to Cool as both are Repulsive to the Un. But, when Ignorance is Ignored; Stupidity is Justified.

Bob's first book, Surprise is A Message of Hope!


To Learn more about Social Security go to www.B4HEART.com!

When Ignorance is Ignored; Stupidity is Justified. 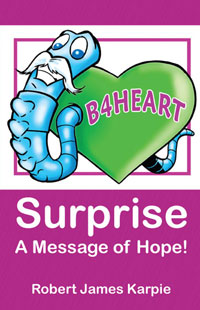 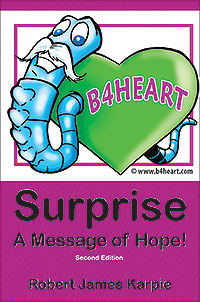 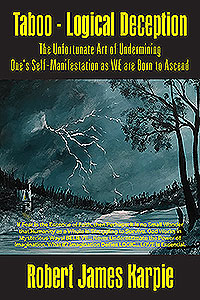