HOW WE TEACH PERFORMANCE ART 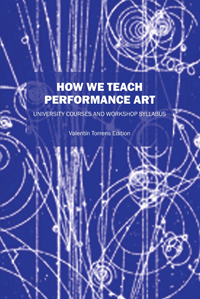 HOW WE TEACH PERFORMANCE ART

42 different approaches to transmit the generative source of creativity in live action by internationally experienced practitioners, teachers and theorists of performance art from 21 countries. 340 pages full of ideas, points of view, methodologies, sensitivities, exercises and proposals to enjoy live practice with deeper involvement immersion, knowledge and study. The book begins with a clarification of the terms used to name this practice and continues with the cultural introductions previously to the appearance of the performance as an artistic differentiated activity. To see the performance’s creative nature and its relation with the game; its communicative qualities and his perception. It’s followed by a report on previous books and publications related to the pedagogies of the performance. Later, a description of education affiliations, inside the pedagogic common tendencies of performance courses. An approach to courses and workshop’s characteristics. It's begun with the syllabus and the comments of the university courses and continues with the workshops. Some teachers have sent a text on their relation to the performance; in those cases, it’s placed before the description of the syllabus, in order to complement, from the subjective intimacy, our best comprehension of his work and his course. After the entire syllabus, there is a small biographical summary of the authors and bibliography on performance. AUTHORS: Lucio Agra / Gustavo Alvarez / Chumpon Apisuk / Marylin Arsem / Bruce Barber / Rocío Boliver / Naira Ciotti / Michel Collet / Brian Connolly / Nieves Correa / Bartolomé Ferrando / Esther Ferrer / Jürgen Fritz / Maja Horn / Johanna Householder / Sandra Johnston / Trisha Lamie / Wen Lee / Laura Levin / Natalie Loveless / Tran Luong / Pekka Luhta / Tanya Mars / Richard Martel / Alastair Mc Lennan / Helgue Meyer / Agnes Nedregard / Guadalupe Neves / Boris Nieslony / Lorena Orozco / Andrea Pagnes & Verena Stenke / Tomas Ruller / Seiji Shimoda / Joakim Stampe / André Stitt / Artur Tajber / Carlos Tejo / Valentín Torrens / Roi Vaara / Valentine Verhaeghe / Willem Wilhelmus.

Performance is an open art form, despite its function being not a message transmitter but a conversational space, for its acknowledgement of the search for sense of experiences. Action has the rhizomatic capacity to infiltrate itself into the audience through their interest for the unsuspected, generating a multiple physical experience by perceptive and knowledge-based empathy. Is a practice based on shared experience, perceived differently by each individual but that gives a personal knowledge to those present. Behaviors and signs are dislodged from their meanings, being sometimes indecipherable, and when understandable they show their mutant nature, regarding their previous and future different meanings, challenging our perception of daily cultural conventions. In performance the correlations of conventional thinking, that allow us to recognize the different frames of deliberation acquired in society, with which we establish sense, references and all kinds of suggestions, are broken. In the perceptive-cognitive and interpretative process audiences become conscious of their thought processing on the search of a slippery meaning that escapes knowledge, but that is an accurate indicator of the mental structures, conventions expectations, flaws and routines that individuals use to connect with the world. Visual and haptic components fluctuate between the strange, the especial, the unfamiliar and the everyday things and lay, always, in the strategy to catch the attention through infrequency. Performance broadens the unpredictability that relates signs with symbols to expose, as the object of the action, the phases of perception and cognitive processes that every participant experiences inside, in his own way, making him aware of his subjective freedom and the boundaries brought by every single form of codified thought. When separated from discursive convention performance polysemous character grows. Polymorphous and polysemic, the performance explores and generates an initial state of creative thinking, of comprehension based on uncertainties. Naked from their previous knowledge, performance and audience throw themselves into the creative-perception of a “present”, made of the collision and encounter of each other. They share an experience that has no relation to their past; opening from the present to the future. The audience is taken by the enigma created by the lack of instrumental elements - its consequences-, they are estranged by the semantic dislocation and the expressive behavior used to identify it with a familiar context. Each individual receives from the performer, rather than a clear content, an image of their own thinking process. Images, dislocated from their own intentions and objectives generate unusual emotions immersed in uncertainty. They are not capable to recall previous reactions or experiences, nor call into memory to help us to “return to the known” to classify the experience; being more about the digressive thinking process than the final not-achieved result. Performance changes the limits of meaning and signifier, now permeable and reversible, originating the indeterciveness which is constantly reconstituted. Performance advocates for the liberation of languages, in constant semantic contamination by its re-configuration and re-signification; is a language critic. Throughout the perceptual process, the initial attractive centripetal movement is followed by another position of self-consciousness that provokes the individual’s displacement positioning him in a creative mind space, inciting the generation of new attitudes as well as mental and mood directions in relation to the world. This will allow the understanding of all that escaping all kinds of meaning, making us uneasy as we explore our unknown self. Information with a tendency to entropy chaos and pending of a process of comprehension to reach a balance in relation to the motivations received. Part of the audience rests deep in a state of confusion that is a symptom of exhaustion after the intense mental process, which although it may bring an unmanageable perplexity, actually, it stimulates a map-less open space. Stresses an open, uncertain inducement, that will expand the audience’s freedom of choice. This mental process does not always coincide with the time and space of performance, which is a source of apprehension and unstable indecisiveness that is impossible to subside neither by the comments exchanged during the action nor by the act of applause. This anxiety stays for days after the performance, inside the body, like a seed that needs to grow. Berlyne proved how the seed planted by art elevates pleasure, acting directly to stimulation . Stimulation is induced in two levels: moderated, with the use of familiar regular patterns or abruptly with the use of new surprising patterns or the complexity that cannot be understood immediately. The performance brings the individual’s inner reflection in each participant, recognizing the importance of subjectivity used to watch an action; life, how we perceive it and how we react to it. Reveals our individual way of thinking in society and how it defines our images and behaviors. Robert Irwin said that the artistic action is an examination of our perceptual processes. Human actions are understood as ontological metaphors with which we define the way we see and feel the world as ideas and substances. If convention generates a sense of agglutinative, coercive group belonging, the performance creates an emancipatory individual attraction. This experience generates a sense of fragmentation according to Clifford Geerz’s symbolic system, which he considers constitutive of a culture’s values, images and visions of the world in the culture’s control function of the conduct, communication and ideology.

Huesca, 1951. Performance practitioner, theorist and teacher. Since 1990, he has performed widely about 30 countries on four continents, presenting his works as one-man actions in international festivals and exhibitions. Since 2000, he organizes the “Territorio Performance” inside the multi-disciplinary Periferias festival in Huesca; the Territoris Nomades in Barcelona, co-curetting editions of another encounter as “Performancear o morir” in México. Valentin has given many workshops of performance, and lectured on this subject in universities of several countries. In 2007 published “Pedagogía de la performance” (sold out) 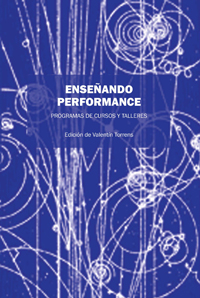