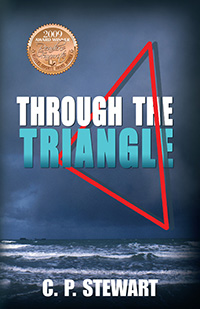 FOR THE PASSENGERS ON OBLIQUE VIEW, AUG. 13, 2005 IS A DAY THAT WILL LAST FOR CENTURIES.

Jake Myers and his semi-estranged teenaged son Nathan were supposed to be on a healing jaunt: a Florida vacation spent deep-sea fishing and theme park hopping.

But they and the three other passengers aboard Oblique View happened to be in the wrong place at the right time – in a storm within the Devil’s Triangle.

On a deserted shore, they discover they are in the right place at the wrong time – the Florida coast nearly three-hundred years in the future.

Then there’s the metropolis nearby that appears to be deserted... appears, that is...

Now, this group is about to confront a dangerous species - part animal/part human... that can see in the dark.

Together with a loose association of other humans, fellow travelers cast off in this strange land and strange time, they’ll have to rely on instinct and cunning to survive.

But something as deadly as the Devil’s Triangle they just passed through might be one of their own.

What follows is a journey of enlightenment as Jake discovers the shocking historical events leading to this new reality and the love lurking right under his nose.

It all combines for a savvy time-travel thriller that will keep you guessing right up until the shocking finale.

Manny Contraldo forced the unconscious body across into the passenger seat, wrestling legs over the console, quickly surveyed his surroundings to satisfy himself that nobody had been watching, and then slid behind the wheel and started the Mercedes. He backed out of the parking space and quickly exited the parking lot, turning left instead of toward the interstate. He wasn’t sure just what his next move was going to be, but he would know it when he saw it.

He glanced at the slumped figure in the seat next to him, noticing the gash across his forehead and the blood that was beginning to soak the front of his shirt.

“I gotta dump this guy before he stains the interior,” Manny growled under his breath.

He peered through the windshield, trying to find a suitable place to pull off and check the comatose figure beside him. Ahead to the right was a large business sign with panels missing; all that could be read was “ –wood” and underneath, FAMILY DINING. The letters that remained were terribly faded, indicating to any observer that this establishment had been vacant for a long time.

He slowed before a plywood-windowed building sitting at the far end of an asphalt parking lot littered with grasses and weeds growing through several cracks. Cautiously steering the Mercedes into the lot, he pulled close to the abandoned restaurant before dousing the lights and turning off the engine. He stepped out of the car and quickly shut the door to extinguish the interior light, while furtively glancing around. Satisfied that his movements were not being observed, he opened the passenger door and pulled the bleeding man out onto the parking lot. He checked for a pulse, and finding none removed the windbreaker, cleaning out his pockets and throwing everything through the open window onto the passenger seat. He dragged the body to the rear of the vacant building and found the back door standing askew; obviously, he wasn’t the first to break in.

Manny forced the door open enough to pull the body inside and leaned it against a wooden cabinet in the kitchen. He started flapping at his head, trying to dislodge a cobweb he accidentally contacted, sputtering, “Agh! I hate spiders!”

Still rubbing his hair, he returned to the car with the man’s blood-soaked shirt, where he removed the gas cap and slid one of the sleeves down inside. The newly filled gasoline soaked the sleeve and moved upward into the rest of the shirt through capillary action. He replaced the cap and took the dripping shirt back into the kitchen where he dripped some gasoline on the body and then swung it in circles, spraying gasoline onto the kitchen surfaces. He then wadded the garment and placed it beneath a receptacle, mounted in a wooden panel. He knew that firemen could tell arson from the pattern of a fire and hoped this might make them think the fire had started in the outlet. His lighter ignited the shirt, which blazed readily and spread in waves with a whoompf, whoompf, whoompf.

He pushed the broken door as close to shut as possible and hurried to the Mercedes, started the engine and drove to the road; luckily, there was no traffic. As he pulled out in the direction of the interstate, he glanced back at the derelict restaurant, and with a grunt of satisfaction saw a bright glow already emanating from the rear of the building.

Manny turned onto I-95 southbound and drove to the next exit, where he pulled into a service station and parked at the far end of the lot away from the pumps. He could now take his time to find out how to profit from the confiscated material on the seat beside him. He already had the car, which was his main objective, and anything else was gravy.

In the wallet were several credit cards, identification, and $236 in cash, which he stuffed into his pocket. He studied the identification and whispered, “Allen G. Cranston, Morgantown, West Virginia.” Manny was somewhat familiar with Morgantown having grown up in Pittsburgh, less than a hundred miles north. “We were almost neighbors buddy,” he said out loud. “Sorry ‘bout that.”

Manny reflected how different his life had been compared to the life he imagined Allen Cranston enjoyed. Allen was probably raised with loving parents, and undoubtedly had nearly everything he wanted. Manny’s mother had vanished when he was three and his father spent more time with a bottle than with his son, and when the old man did spend time with him, Manny usually first felt his disgust, and then his belt. He still had nightmares about the night he awoke screaming when he found a large spider in his bed and his father beat him for disturbing his sleep. On top of everything else, he had been named Manford, a cruel trick played out on a child. His name, in addition to his home life, forced him to become self sufficient, leading to many other activities while trying to prove his worth to peers. There were the gangs, car-jackings, rapes, and fights. He accepted, and even embraced the lifestyle until his final arrest. Twelve of his twenty-eight years had been spent in various correctional facilities, reform schools, local jails, and prison, but his last arrest on felony armed robbery had him looking at ten to twenty years of hard time … until his escape. Unfortunately, a cop was killed during that escape, which immediately placed him on a Most Wanted list. That was the reason for his southward trek, heading to a perpetually warmer climate, and hopefully out of the country.

In his favor were his demeanor and looks. He had been told many times how good-looking he was, and he could feign sincerity with strangers. He sounded well educated when he wanted to, and had charmed his way out of many jams in the past.

He lit a cigarette and took a deep drag, then searched and found nothing of interest in the glove box. “Where were you headed?” he whispered.

Twisting to put the wallet in his back pocket, Manny’s foot bumped against something under the seat. He reached down and pulled out a clipboard holding several pieces of paper. He examined the papers in order without removing them from the clipboard and murmured softly, “My, my, what an organized person you are ... were.” Included were receipts for gasoline and meals, confirmations for hotels, an AAA Trip-Tik to Ft. Lauderdale, maps of Southeastern States and Florida, and a confirmation for a deep-sea fishing trip set for the day after tomorrow. The trip was to originate at Cape Arthur, which appeared on the map to be a little north of Ft. Lauderdale. This last document held Manny’s attention, “What a great way to skip the country,” he said louder than he meant to, and glanced around to make sure nobody had heard. I got this guy’s car to make the trip to Florida and I can get a boat there to make the trip to Cuba or Mexico. Thank you Allen Cranston for my ticket outta here! He gunned the engine, and wheeled the Mercedes back toward the interstate. 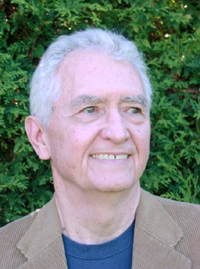 C.P. Stewart made a career of teaching high school and, when requested, university physics. A lifelong resident of western Pennsylvania, he is married with two adult children and one grandchild.

Visit the Through The Triangle Blog 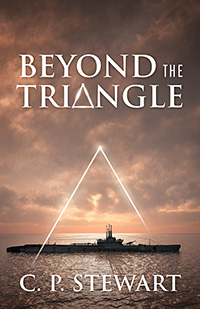