Near Mrs. and Direct Hits of an eccentric thousand-aire 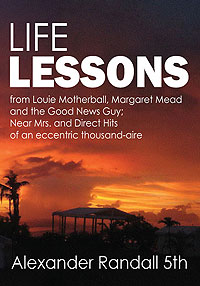 Near Mrs. and Direct Hits of an eccentric thousand-aire

“My life is a series of disasters punctuated with miracles.”

“My life is a series of disasters punctuated with miracles.”

He is not the world’s richest man, nor the most famous, but this man, who created the first e-commerce business, discovered the secrets to real happiness. Life Lessons charts the disasters, pitfalls and lessons from some of the great iconic teachers of the 20th century.

Randall’s tale is a saga of invention, entrepreneurship, sudden sharp turns and jumping off a cliff with no parachute. From the Top of Beacon Hill in Boston to a remote Caribbean Island – from Ouagadougou Burkina Faso to the Jungles of Malaysia Randall’s saga is a world tour of unexpected adventures. He chases the Dream People trying to find the secrets of Dream Telepathy, shoots the rapids on the Merced River and stalks the halls of top universities trying to figure out how society separates visionaries from crazy people.

In a text richly illustrated with photos both ancient and modern, Randall takes us on a tour of an amazing life. His tale bring us face to face with ancestors and mentors; Margaret Mead, Bucky Fuller, Marshall McLuhan, Pres Eckert (the Inventor of ENIAC) Albert Hoffmann and Humphrey Osmond (of LSD fame), and some top psychologists probed the depths of the Dreaming Mind to discover the origins of consciousness.

Randall charts a wandering path from the earliest days of personal computers, when databases were managed with knitting needles and punch cards, when modems moved data at a snail’s pace; through the struggle to create a viable business; the creation of the first e-commerce business; the first cyber café and a world class charity to bring personal computers and The Freedom Technology to people behind the Iron Curtain, breaking United Nations Sanctions and “gun running” laptops to clandestine drop points.

Randall’s tale is also a story of Family and Deep Emotions; the tragedy of infertility, guiding his wife through a maze with Cancer and an inevitable death. Three Eulogies in as many years and the miracle of finding a new partner despite living on a remote island.

Did he discover the secrets of Real Happiness in the Classrooms of Princeton and Columbia, or in mountains of Bali? Behind the Berlin Wall or in the arcane language of CompuServe?

What is it like to have an elephant sit on you? Or live in a prison for the Criminally Insane?

And how come he had to wipe the bottoms of ten million mice – was THAT where he discovered the secrets of happiness?

The book is richly illustrated. Chock full of “Life Lesson” and some of the best sound bites and aphorisms of the late 20th century’s greatest thinkers.

Sample Text from Various Chapters At my wedding, my newly minted father-in-law wrapped his long arm around my shoulder and said, “Son, I’m gonna tell you one word that will make your future.” He paused as I expected the line from the hit movie “The Graduate” where the one word is “Plastics” but instead he said in a solemn tone, “RS-232”. I was dumbstruck. I had no idea, but he went on, “It’s the connector that lets computers communicate with modems.” I still had no idea. But he was right. Years later I created America’s very first e-commerce business and at the core was my modem.

In those days I thought I knew all about computers. I was the godson of the Pres Eckert, the chief engineer who designed ENIAC, the first all-electronic computer. I’d been taken as a child to see ENIAC and various UNIVAC computers. They were huge monsters, dozens of massive steel boxes with massive tape recorders, all of them housed behind glass walls in climate-controlled environments. I’d learned as a child that computer work required engineering genius like Uncle Pres had. So when my father-in-law regaled me with the wonders of modems, my eyes glazed over and I went on with my life.

In Bali, Indonesia, that Australian ecologist we’d me was doing research on rice yields. He had built himself a home-brewed computer: no glass room or monster metal cases; his was housed in a homemade wooden box and powered by a car battery. I was fascinated. A few weeks later at an air base in Japan, I met some grade school kids who were all twitterpated with their Apple computer and were talking about DOS. I was shocked that a 10-year-old knew all about something of which I knew nothing. My first computer came with three pieces of software: DOS 1.0, EasyWriter and a game called Asylum. EasyWriter was, well, easy. Asylum was build with IBM’s block graphics, a vain effort in those days to use the space of a letter to make a shape. Someone had obviously spent a lot of effort creating “rooms” and “people” that all looked like stick figures done by Mondrian. It was as much fun as playing with a stick and a string.

Still driving, I was struck with a vision; I stopped on the roadside to called Camie. “What if we made a market, a trading post where people could sell the machines they outgrow – We’d help make them cheaper with an organized market? We’d help people move up to their next machine. We’d help people on tight budgets get a good used computer at the fair price and mostly we could get really good gear for ourselves.” She understood instantly.

By the time I got home she had drafted our cards – not business cards, trading cards. The blue one said “I want to Sell.” The orange said “I want to Buy”. Fill in the blanks for Maker, Model, RAM, disk drives, printers and other peripherals.

We printed 100 copies and took our cards to the next meeting of the Boston Computer Society. I boldly stood up during the question time and announced, “If you want to buy or sell a computer, see me and fill in one of these cards.” We were inundated. Everyone in the room wanted to sell their old computer. Everyone had something they wanted to buy. They filled in ALL of our cards and we spent the whole evening laying them out on the living room floor shouting out, “I got a guy here who wants to sell an Apple II at $1,200.” “Here’s a buyer for that at $1,300.” We made dozens of phone calls the next day and by week’s end we’d concluded 30 deals collecting a 10% commission from the sellers. Checks came in and The Boston Computer Exchange was a success – for us and for our customers.
We had no idea what we were doing, no experience starting a business, no money and no idea about the laws and rules... so we were ideally suited to create a new business.


Wizard’s Principle: On every mountain there is a single pebble – Move it and unleash an avalanche. Find that pebble.

Law of Ample Supply: Only ask people to bring to the table what they have in abundance and can share generously — we all come out way ahead.

Motherball’s Law of Options Shock: Whenever you choose something, you are NOT choosing everything else.

Writers Perplex: When you are writing a book or a dissertation, everyday feels like Tuesday; there is no relief in sight. 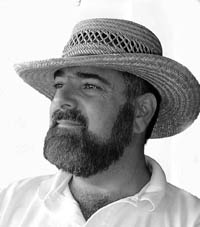 He is the Good News Guy for the US Virgin Islands, Professor of Communication at the University of the Virgin Islands and host of the Podcast from Paradise.

Randall Lives on Water Island in the US Virgin Islands with his wife and five children. 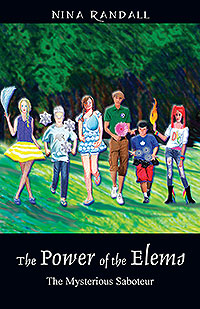 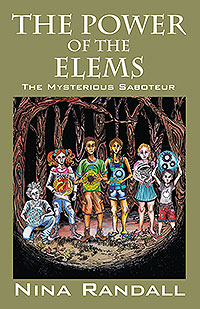