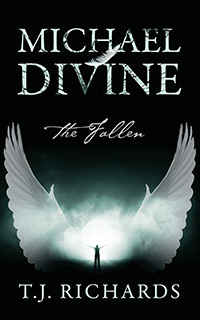 Michael was a normal high school senior until everything starting going to hell...literally.

Ever since Michael the Archangel fell from Heaven, there has been no peace there. Gabriel, one of Heaven’s most fearsome angels, has been looking for Michael for some time now. Finally, some of the darkness clears and he spots a spectacular glow, which must be where Michael is. But if Gabriel has found Michael, his enemies surely have as well…* * *Five days from his high school graduation, Michael Divine’s world is turned upside down. It begins with a series of strange occurrences that do not make sense, and an encounter with a mysterious visitor. Michael discovers he is not who he thought he was, and he learns of the terrifying journey he must take. His task? Return to Heaven and prevent evil from taking control. Will Michael prevail in this war between good and evil? Find out in the first of the Michael Divine series.

T.J. Richards lives in California with his family and is currently attending a California university. The Michael Divine series was written during his junior and senior years in high school detailing Michael the Archangel’s journey back to Heaven. T.J. enjoys writing in the genres of fantasy, horror, and mystery.