Rhema: Seed for the Soul 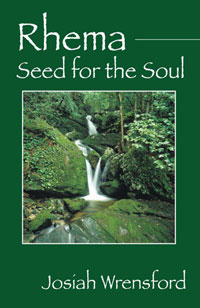 Rhema: Seed for the Soul

I can count 700 billion ways Jesus is better.

Visit www.sword-in-pen.com for information on the bailout that was God's idea.

From the next book, Death before Life:
The Wilderness
I'm torn between two parts
Me from the heart
And me from the start
Of this walk
I can talk the talk
But a consistent walk
That's something different
That's history
Kinda like His story
That walk in the garden
With sweat like blood
My sweat drips down
With anguish
I slip
Down to the ground
To have to get up again
My friend
My cycle has just been found
It has been seen in me
And the hardest thing is
Nothing can be done by me
I'm too weak
And it's Him I seek
Meek and lowly
But boldly
To remove that thing
That's ungodly
But He won't
But He will
So to speak
It's History
Til death do us part
It will be one or the other
I plan on it being you
Not me
So I gotta walk
Around
Til in death you're seen
To take your last breath
Never to be resurrected
I'll walk in this spiritual wilderness
Til this generation
Has been moved
Out of the way
That's History
Today
Is the past
In the present
So I'll walk
Until this part is torn from me
Until past and present
Are separated definitively

Josiah L. Wrensford was born to a God fearing couple, Cordell and Deborah Wrensford in June of 1983. At a very young age his parents began to teach him in the statutes set forth by the Word of God. Josiah very quickly became a student of the word in his youth . He also excelled in school and in sports. At the age of thirteen his life took a dramatic turn as his parents began their missionary trip to the island of St. Christopher in the Caribbean aka St. Kitts. As he continued to grow he found that his interests started to turn from the presence of God to some of the things that so easily distract young people today. This continued through the middle of his college career when he and his soon to be wife made a choice. They decided that they could not depart from the teachings they received as youngsters. What's more important is God's plan for their lives was beginning to be clear as they witnessed His favor, blessing, and protection time and time again.
At the turn of the new year in 2005 Josiah began recording specific revelations he received while in prayer and devotion, while in fasting, and through personal experience. What transpired was the creation of a composition that would be the first of his writing career. Although his goal is medical school, he realized that the gift that God had given to him was meant for this purpose, that is, to encourage people to try Jesus.
At this point in his life he is happily married to the stunning Cecilia Wrensford and they are actively involved at New St. Mark COGIC in Portsmouth, VA where they have been faithfully attending since the Fall of 2004.
There has been so much that has occurred in his short life and he is very thankful for every blessing he has received from the Most High, but knowing God he still has to ask one question,"What's next?"