A Legacy of Prose & Poetry 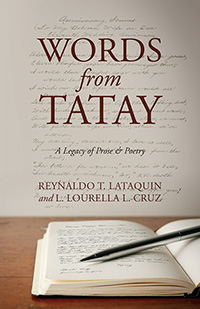 A Legacy of Prose & Poetry

Words to Treasure for all Ages

Words from Tatay is a collection of heartfelt and inspirational poems written by Reynaldo T. Lataquin over the span of 77 years (1934–2011). Reynaldo passed along his collection to his only daughter, Lourella Cruz, who annotated the poems and prepared the manuscript for publication. This collaborative effort shares a variety of sentiments—frequently touching upon the cornerstones of faith, hope, and love—and illustrates the history of one family and the challenges and trials they endured as they moved through life and eventually achieved success. Words from Tatay is a lyrical testament to the power of familial ties and the legacy of love.

REYNALDO TOLENTINO LATAQUIN: ~~~ Reynaldo was born in Iloilo City, Philippines on July 9, 1918 to Patricio B. Lataquin and Dolores Tolentino. He had 3 brothers: Manrico, Rodolfo, Patricio, and a sister, Norma. After finishing his elementary and intermediate school education from Iloilo Central School, Iloilo City Philippines, Reynaldo proceeded to complete the Elementary Teachers Certification from Iloilo Normal School. He immediately taught in the Elementary Grades, interrupted only during World War II. Reynaldo was a member of the United States Army in the Far East, receiving training at Fort McKinley in Manila, Philippines. He was selected as a member of the Signal Company (0-26558), under General MacArthur. He was an expert in the Morse Code System and was skillful in decoding hidden messages. In June 1942. Reynaldo married the love of his life, Luz Belanio. They celebrated 69 years of marriage. They had six children, 13 grandchildren and 3 great grandchildren before their death. Reynaldo believed in the importance of Education. After getting married, and despite having children and teaching full-time, he continued his education, completing his Bachelors of Science in Elementary Education, Bachelors of Science in (Secondary & Higher) Education, and Masters of Arts in Education. He also pursued a degree in Doctorate of Philosophy in Psychology from the University of San Agustin in Iloilo City, Philippines. Reynaldo rose in the ranks from Elementary School Teacher to becoming an Elementary School Principal, and finally becoming a Dean before retiring from the University of San Agustin in Iloilo City Philippines and immigrating to the United States in 1982.~~~ *In 1981, Reynaldo was the recipient of the Professor of the Year from the Philippine Ministry of Education of Culture. At the same time, his wife Luz was the recipient of the Public Schools Supervisor Award from the same Ministry.~~~ *Reynaldo died on November 21, 2012. ~ ~ ~ ~ ~ ~ ~ ~ ~ ~ ~ ~ ~ ~ ~ ~ ~ ~ ~ ~ ~ ~ ~ ~ ~ ~ ~ ~ ~ ~ ~ ~ ~ ~ ~ ~ ***About the second author: ~~~ *Lourdes Lourella Latquin Cruz is the fourth child, the only daughter, of Reynaldo Tolentino Lataquin and Luz Belanio Lataquin. She was born and raised in Iloilo City, Philippines. She attended the University of San Agustin from the time she was in first grade all the way to finishing her Bachelor’s degree in Chemical Engineering in 1972.~~~ *After passing the licensing board exams for chemical engineers, and a year stint working in research Lourella received a scholarship and a grant to pursue graduate studies in Manila. She completed her M.S. degree in Chemistry from Adamson University in 1976. She was then hired by the University of San Agustin to become a college professor in chemical engineering. Lourella married Bernard Cruz in 1977. They have one daughter, Loubel. The family immigrated to the United States in 1982. Lourella worked in the oil industry for 18 years after which she became a full time chemistry professor at Lone Star College, where she continues to teach at present time. Among her most treasured awards are the 1976 Graduate Thesis Award from the Philippine Chemical Society; 2004 Faculty Excellence Award from NISOD (representing CyFair College, now Lone Star College – CyFair), and the 2013 Outstanding Chemistry Teacher Award from the American Chemical Society. ~ ~ ~