Reflections of a Pro Baseball Player-turned Architect and Developer 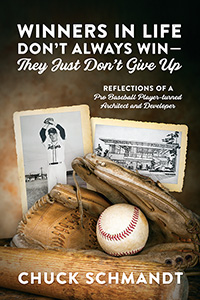 Reflections of a Pro Baseball Player-turned Architect and Developer

A Life Lived with Persistence and Purpose

Charles K. Schmandt came into the world under unusual circumstances—he was born in Portland, Oregon during the Great Depression, long before the West Coast city was an attractive place to be. And he was born to immensely loving, capable parents who were both deaf-mutes. He and his brothers had a unique start in life as hearing children of Deaf parents, instilling in them a remarkable “can-do” attitude as they navigated a family life unfamiliar to most, while exploring their own significant talents. As the family moved around the United States looking for work, they eventually settled in Santa Barbara, California. As the oldest of three siblings, Charles became the family “spokesman” at the age of nine, and as he grew up, he worked alongside his father in many trades, acquiring skills and perspectives that would serve him in surprising ways, later in life.

After graduating from high school, he married Phyllis Goldschmidt and became Assistant Manager for Standard Stations until an opportunity came along that he couldn’t pass up: the chance to play professional baseball with the Cleveland Indians.

But this isn’t the story of a baseball career. Schmandt’s dream of baseball was interrupted—first by the Korean War, and then by his own misgivings about whether that was the right choice for him, long-term. And thus began his remarkable self-reinvention as an architect, despite no formal education in the field. This compulsively readable memoir takes you through the ups and downs of a man whose vision was always focused on possibilities, which led him from a memorable stint in the sports world to the pinnacle of success as an award-winning architect. Warm, relatable, and inspiring, this look back at an epic life has something for every reader.