How to Make the Best of Your New Life as a...

by George B. Blake 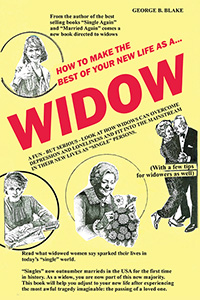 How to Make the Best of Your New Life as a...

by George B. Blake

Widow starts with a bang as the first chapter has letters written to Mr. Blake by three widows who each tell how they made the adjustment to their newly unwelcomed lives. The book emphasizes the "positive" side of life, with a little humor thrown in, attempting to bring back some joy into the lives of widows (or widowers) trying to recover from the loss of a loved one.

George Blake is a successful advertising executive who became single after 18 years of marriage. He soon realized how very difficult is was to meet new single acquaintances of the opposite sex so he embarked on a 20 year research program among singles to determine the best ways and the best places to meet other singles. His research involved interviews with over 29,000 singles from all around the country, many as a result of his appearances on 160 call-in talk shows. He has written a popular syndicated newspaper "singles" column for 14 years which helped considerably with his research. After he wrote 6 books on "singles meeting other singles", he realized that no book had ever been written of the difficulty of widows meeting other singles...so he stepped-up his research to specifically involve widows (and some widowers as well). Now the 50 million widows in the U.S.A. have a source to turn to restart their lives after the tragic loss of a loved one.