Why We Don't Kill Spiders

A Tale of Bannockburn 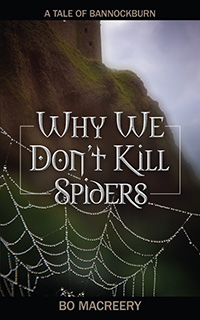 Why We Don't Kill Spiders

A Tale of Bannockburn

Every Legend Has a Beginning

One a medieval king, stripped of everything.

One a hobbled knight, armed only with a pen.

Each destined to save his nation’s heritage from oblivion.

Driven by a promise to a grandfather.

Bound by the single, silky webbing strand of a wee spider.

This is their story.

The bones dropped from their leather pouch onto the flat courtyard stones among the swirling first flakes of snow. Thomas Learmount observed the artifacts as they lay and his thick, grey eyebrows, belying his relative youth, held their frown. A frigid gust flopped the rounded point of his purple cap in front of his eyes. With a disgusted swat, he brushed it to the side. One by one he retrieved the items. A wolf’s canine. A crow’s beak. A frog’s foot. The center section of the pinky of a saint, which one he would not say. Each one he dropped purposefully into the bag, the scrotum of a highland bull.

After a quick shake, he opened the bag and let the contents drop to the ground. His eyes darted quickly, reading, interpreting. The concern remained. Same results.

The heavy door to the reception hall of Edinburgh Castle creaked open, the illumination from within wafting out through the falling snow. The Earl of Dunbar, shawl now draped across his shoulder, stepped easily across the open yard of the Upper Ward.

“Thomas,” the Earl said quietly, “he will see you now.”

Thomas did not stir. Most vassals would receive a sharp rebuke for lacking attentiveness toward his feudal lord’s directive. Especially when the he who would see him now was the King of Scots. Alexander. The third such named in the realm’s history. Known in the common parlance as Alexander the Peaceable. As much for his expulsion of the Norse Vikings from the Western Isles after his brilliant victory at the Battle of Largs as for his politic dealings with his brother in law to the south, the English King Edward.

However, Thomas Learmount of Erchildoun, what we now call Earlston, received no such reprimand. Thomas was not the common vassal. He was a seer. So accomplished in fact, many regarded him a wizard. The odd speech pattern of the man, particularly when foretelling the future, earned him the title, Thomas the Rhymer. 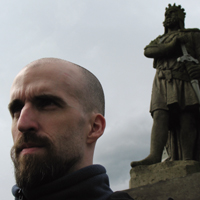 Bo Macreery lives in the Washington DC area with his wife. Together, they have made numerous treks to Scotland, examining the footsteps of Robert the Bruce and Sir Walter Scott and tracing the heritage of their families. This is the author's first novel.