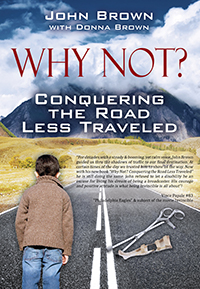 Don’t Be Afraid of Failing, in Failing There is Learning.

Cerebral Palsy, a developmental disease impacting motor coordination, affects 3 out of 1,000 births. While medical intervention such as physical or speech therapy, ambulatory aides like wheelchairs or braces, help a child achieve a productive life, John Brown was determined that he would leave his mark on the world. Born in the early 50’s with a type of spastic CP impacting his gait and balance, but leaving his speech intact, John and his strong willed mother fought against the times’ conventional wisdom and doctors’ predictions that he would never walk. After an early childhood of repeated muscle lengthening surgeries and body braces, he insisted upon leaving a special education school to be mainstreamed in the Philadelphia Catholic, then public, school systems, and went on to play Catholic grade school football and developed a keen interest in high school wrestling and football. After completing a degree in broadcast journalism, he embarked on a 44 year career as an award winning Philadelphia radio disc jockey, traffic reporter and meteorologist, retiring in October 2013. From the childhood specialists who viewed him as just another special needs child, to his first radio program director who called him a diamond in the rough, John was determined to be the best in his field and demonstrate that hard work, perseverance and, some luck, can help one trump the odds no matter the obstacles. John’s is a story of the American spirit, how tears, determination and true grit can get you to the top. “John is a man who let others know it’s not a disability it’s a different ability.” Bruce Hamilton, Anchor WJXT Channel 4 the Local Station, Jacksonville, Florida “John Brown epitomizes everything we Scots hold dear to our hearts. Courage, Inspiration and Dogged Determination.” Lorna Johnson, Linlithgow, Scotland Scottish Poet and founder of Quill Poetry Group (West Lothian) 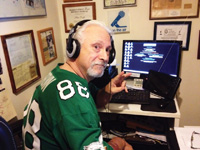 Despite John’s Cerebral Palsy, he enjoyed a 44 year radio career in Philadelphia and Chicago. Recipient of Variety Club’s Lifetime Achievement award, he was named Philly’s Best Traffic Reporter four times and Best Weathercaster twice. He also was awarded the Philadelphia Milestone in Radio Award for his 30 plus years of contributions to the radio arts in Philadelphia. His wife, Donna, a 35+ years benefits professional, retired in 2017. They live in Long Pond , PA in the Pocono Mountains with their dog, Skye, and cats Hammish, Wallace and Argyll. 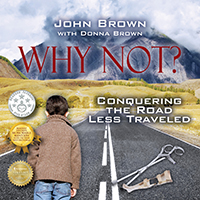