My Journey Through The Golden Years Of Rock and Roll 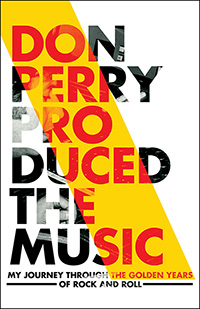 My Journey Through The Golden Years Of Rock and Roll

Don Perry was an “eye-witness” to the birth of Rock and Roll. When Elvis Presley arrived, Rock and Roll exploded and Don knew he wanted to be a part of it. In 1963, he sold his car and armed with enough money to last six months, headed to Hollywood to become a Rock star. Surely that would be enough time. That six months stretched to nearly thirty years and as Rock evolved and changed, so did Don’s career. “Don Perry Produced The Music” traces his journey as a singer/songwriter, recording engineer, record producer, manager, concert promoter and finally, music supervisor for film and TV. It also traces the golden years of Rock and Roll and how they shaped every step of the way.

Don Perry spent thirty years in the music business. During that time, he built one of the most successful music production firms in Hollywood. After working as a recording engineer, record producer and successful concert promoter ( Stevie Wonder, Earth, Wind and Fire, The Jackson Five and more), Don pioneered the field of independent music supervision for film and television. His music can be heard in nearly one hundred feature films and countless hours of movies for television and series. Records that Don has produced have exceeded five million in sales. He currently lives in Carmel By The Sea, CA with his wife Linda and son Steven.