A survivor's tale of the January 12, 2010 earthquake in Haiti 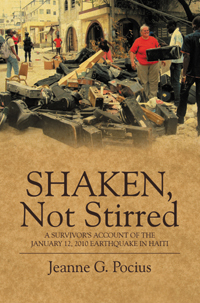 A survivor's tale of the January 12, 2010 earthquake in Haiti

It was just another ordinary day, a Tuesday, the 12th of January, 2010, in downtown Centreville (center of the city), Port-au-Prince, Haiti. I had returned to Port-au-Prince to continue my ministry of trumpet performance and education. We had big plans to build new schools and to develop programs for existing schools... As I stood to pass out papers in the jazz band rehearsal on Tuesday, January 12th, I placed my ZN5 camera/phone next to my calendar on the piano’s music stand. Suddenly, I heard a low rumble, like an ominous timpani roll. “Oh, no” I thought, “they’ve damaged a supporting column in the new construction in the elementary school and it’s coming down.” That thought lasted all of two or three seconds before the floor began to buck and heave like the surface of the ocean in a hurricane, and I knew we were having an earthquake. 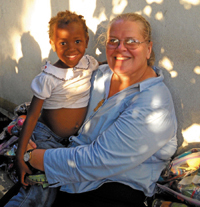 Jeanne G. Pocius, musician-educator in Haiti, is founder of the non-profit charitable corporation INSTRUMENTAL CHANGE, Inc (ICInc) which benefits new vocational-music schools in Haiti. Her first book with Outskirts Press, Trumpeting By Nature, is acclaimed throughout the trumpet world as an essential reference for trumpeters of every level. She has been a music educator since 1970, and professional, performing trumpet soloist and lead player throughout the United States, Canada, the Caribbean and Western Europe. All profits from the sales of "Shaken, Not Stirred" will be given to the development of new schools to replace those destroyed in the earthquakes. 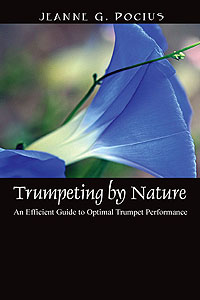