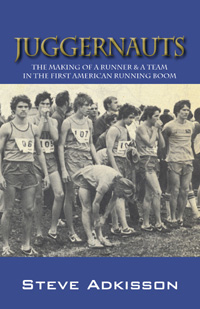 Destined to be a cult classic.

As the first running boom was sprouting in the early 1970’s, a group of Kentucky teenagers found themselves under the guidance of a young coach who was ahead of his time. Cross country was regarded as a sport for the slightly odd and unathletic, a means of “getting an easy varsity letter”. Among this group of runners was a particularly odd (though strangely athletic) teenager who was taken in by the joy of running over the grass, hills, and mud of cross country courses. The coach and seasonally growing team rose to dominance of Kentucky cross country in the span of four short years. Along the way, they “learned the lessons every runner has to learn, mostly the hard way, many of them twice.” From humble backgrounds, the Lloyd Memorial High School Juggernauts led the way for high schools in Northern Kentucky to win State Championships for over thirty consecutive years. This is that story.

Finally, the completely revised Second Edition is now available. Demand for the first self-published edition took me by complete surprise. I had no idea people other than my friends would want to read this book, so I had not edited it to the standard of a marketable book. Enjoy!

Steve Adkisson's book "Juggernauts", on the surface looks like simply a trip down memory lane and a record and rehash of his high school running days. The book is advertised among the running community as "Destined to be a 'Cult' Classic", which is undoubtedly never going to be disputed. However, having just finished reading it, and knowing that prophesy is risky business-----I am going out on a limb and say, it is more than a cult classic----it is a classic----period. It is the running equivalent to Jack Kerouac's novel, "On the Road." Which means it's more than just about the adventures of a bunch of high school cross country runners in the early seventies. It's about the quest! Where are we going? Far further than you can possibly imagine! The book gets down to the meaning of life. It's a coming of age story about the ennui of high schooler's, going everywhere and in search of something, that they don't even have a clue that they are even looking for. Filling the empty space with the substance of their lives! The story is written ecstatically and reads like a manic screen play running version of the movie "American Graffiti". It is that good and even though it is Adkisson's 4 year successful high school career compressed into a 2 85 page autobiography, it reads tight, focused, and fast as a 5 mile run at 6 AM down a dark country road at 6 minute pace------in other words, the novel goes by fast and clear leaving you wanting more when it is over. Yet, also, leaving you with an unmistakable image and message-----life is short, don't waste time, it's later than you think. All of you who are , or were, runners, will find so much to identify with that you will acutally be transported back to your youth and have old feelings and emotions, that you thought were long gone come rising up to your surface and re-energizing you with the life affirming remembrances of, "Yeah I was once that alive!" Yeah! I onced squeezed every ounce of talent and effort out of this pitiful and scrawney body God gave me!" Any book that can do that is more than a book. It is magic and a joy. For people who were never runners, they will never know the feeling that us running addicts have of being more alive than human life allows------or as Adkisson experiences at the bottom of page 161, after running the perfect race and slipping into that sweet spot of time, "I think I saw God today." What Adkisson is saying and connects the reader with in this book is nothing less than the gestation and generation of the essentials of his soul------a "Strawberry Fields" moment! But the major triumph of "Juggernauts" is that compared to F. Scott FitzGerald's statement at the end of "The Great Gatsby"-------"so we beat on, boats against the current, borne back ceaselessly into the past."----------------Adkisson answers him with------the past is not dead, in fact it's not even past, which means our dreams still matter and the reward for existence is the living itself! Fantastic! And this book is alive. Stacy Osborne January 2009

“I for one was envious after reading about the various escapades that the team members had together. Why didn't we do some of those things when we were in school? “

“It is, as I’m sure was the intention, inspirational. A very good read.”

-James Galvin, The University of Iowa Program in Creative Writing

“Juggernauts is the best book on the sport of cross country I’ve ever read. You can feel what happens in the races. Steve Adkisson has captured the spirit of what it’s like to be a runner, a teammate, and a teen in the 70’s. I laughed out loud.”

“As a former high school and collegiate runner, I was able to relate to many of the runners and events in this story. It brought back a lot of memories, and I felt as if I were right there standing on the starting line with the rest of the team. A truly engrossing and engaging read that I recommend to anyone.”

Steve Adkisson graduated with a degree in Creative Writing from Murray State University. He has written for a wide range of magazines including: Runner’s World, Carrozzeria, Banjo Newsletter, and National Review (Australia). He has been a runner since shortly after he could walk.

I am humbled by the positive feedback and thank you all for the many kind comments you have made. I am a few days behind in responding to your emails, but it is my intention to get back to each of you. Many blessings to you,