THE SECOND INVASION OF NORTH AMERICA ABOVE MEXICO, THE FIRST NINETY YEARS, Indigenous Americans' Successful Defense against Europeans, 1521 to 1610 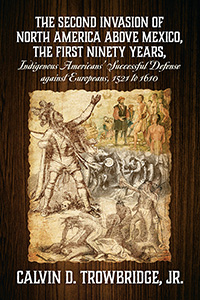 THE SECOND INVASION OF NORTH AMERICA ABOVE MEXICO, THE FIRST NINETY YEARS, Indigenous Americans' Successful Defense against Europeans, 1521 to 1610

Columbus landed in the Bahamas in 1492. In 1521, near Fort Myers on Florida’s southwest coast, Ponce de León launched the first European invasion of North America above Mexico. Calusa drove the Spanish back into the Gulf of Mexico and fatally wounded de León. In 1610, after 90 years of repeated European incursions, English withdrew from Virginia. Europeans had outposts only at Quebec City and St. Augustine and in central New Mexico. Less than 1,000 Europeans lived in North America above Mexico. But the cost to indigenous Americans had been horrific. How had the Americans held off the Europeans? READ ALSO: Three Bloody, Diseased, Deadly Decades, 1610–1640 by Calvin D. Trowbridge, Jr., the first book to focus on the thirty years beginning the history of modern Canada and the United States. By 1640 Europeans controlled much of the Atlantic Ocean seaboard and central New Mexico and had established European-style governments. More than 30,000 Europeans lived in North America above Mexico. Thousands of indigenous Americans had died in warfare. Tens of thousands had died of disease. How in 30 years had Americans lost control of so much land?

Calvin D. Trowbridge, Jr., an historian and biographer, has also written Three Bloody, Diseased, Deadly Decades, A History: The Beginnings of Modern Canada and the United States, The Struggle Between Indigenous Americans and Europeans, What Really Happened, 1610–1640, and Marconi: Father of Wireless, Grandfather of Radio, and Great-Grandfather of the Cell Phone: The Race to Control Long-Distance Wireless, 1874–1937. He lives in Martinsburg, West Virginia, with his love, Alice Hartge Wilson. A SERIES: THE SECOND INVASION OF NORTH AMERICA ABOVE MEXICO trowintl.com 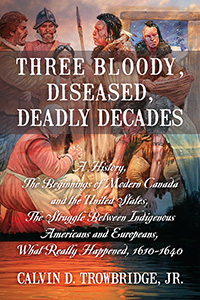