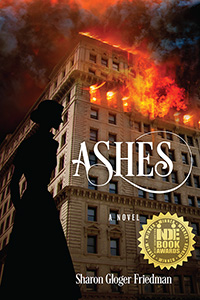 A Jewish Family’s Epic of Hope, Tragedy, and Survival

Easter Sunday, 1903 ushered in three days of government-sanctioned brutality on the Jews of Kishinev, Russia. In the aftermath of slaughter, rape, and destruction, Meyer and Sadie Raisky escape to New York City with their thirteen-year-old daughter, Miriam. Their home and business gone, reeling from devastating personal tragedy, the Raiskys cling to the promise of a better life in America. But upon arriving in New York City, Miriam and her parents quickly learn that promises are easily broken in the tenements of the Lower East Side. When circumstances force Miriam to abandon the schooling she loves to help support her family, she goes to work at the infamous Triangle Shirtwaist Factory, joining other immigrant girls who work long hours for low wages in shocking conditions. Against the backdrop of emerging workers’ rights and women’s rights, Miriam’s social conscience and young womanhood both blossom when she falls in love with a union organizer. Meticulously researched and rich with beautifully drawn characters that bring 20th-century New York City to life, Ashes is a testament to the resilience of the human spirit, and a haunting elegy to the young women whose suffering inspired changes to the working conditions in the garment industry.

The chill of the waning days of March seeped into the old stone house on Gostinnii Street. In no hurry to leave the warmth of her bed, thirteen-year-old Miriam burrowed deep into the covers. The clanging of pots and pans and the smell of simmering chicken soup from the kitchen below could only mean that her mother had been up for hours preparing the house for Passover.

Miriam groaned at the thought of all that had to be done. The pots and dishes the family used the rest of the year had to be put away. The plates and utensils used just for Passover had to be washed and made ready for the eight-day holiday. All chametz, leavened food not kosher for Passover, had to be removed from the house and burned.  And despite Mama’s head start, they would be cooking and baking all day in preparation for the first Seder tonight.

Half awake, Miriam rolled to her side and tried to reclaim a few more minutes of sleep.
As if she had read Miriam’s mind, her mother called up the stairs, “Miriam, get up, you lazy child.”

Miriam pulled a pillow over her head and closed her eyes. It was so unfair that her brother Eli could go to school and was not expected to do anything in the house while she had to spend the day cooking and cleaning with Mama.

“Miriam, get up this instant,” said her mother in a voice that sent Miriam scrambling out of bed.  Shivering, she washed her face in the blue enamel basin on the bedside table, dressed quickly, and put her unruly red curls into a thick braid before she scurried downstairs.

“Look who has blessed me with her presence,” said Sadie, her smooth face flushed from the heat of the kitchen.  Beads of sweat dotted her forehead, the dark hair peeking out from her head scarf damp with perspiration. When she hugged and kissed Miriam, the matzah flour clinging to the front of her apron sprayed yellow powder into the air.

Sullen and still sleepy, Miriam wriggled from her mother’s embrace and drew closer to the warmth of the brick oven.

Sadie studied her spirited daughter. Why hadn’t she noticed before how tall Miriam had become or the soft curves that were changing her slender body? When had her round face been replaced with high cheekbones and the small cleft in her chin become more prominent?

Conscious of her mother’s stare, Miriam smoothed away the loose curls that had escaped her braid and stared back in defiance, tiny freckles dancing brightly on her cheeks.

“Don’t give me that look. I know you are mad at me for getting you up early, but there is much to be done, and I need your help.  Uncle Reuben, Aunt Gitel, and the girls will be joining us for the first and second Seders. They’ll be staying here both nights. And no arguments; Bina and Riva are going to sleep in your room.”

Miriam’s blue eyes flashed in anger. “Mama, they are spoiled brats. All Bina talks about are her fancy clothes and the boys in her class. Riva does nothing but whine. And how come Bina and Riva can go to school, and I can’t?”

There it was: Miriam’s greatest disappointment and Sadie’s greatest heartache.  Bright and curious and so eager to learn, Miriam desperately wanted to go to school like her brother.

“I am sorry, Miriam, but you know there’s not enough money to send both you and Eli to the Jewish school. Papa will continue to teach you at home.”

“But, Mama, Uncle Reuben owns a general store just like Papa does. Why don’t we have as much money as they do?”

Sadie’s face hardened. “Miriam, my brother inherited the store from your grandfather. You know your father started with nothing and made his way on his own.  Meyer Raisky is a respected member of this community.  You should care less about how much money we have and more about what a good man your father is.”

Ashamed, Miriam looked down so Sadie could not see the tears welling in her eyes.

“Now, eat some breakfast and then let’s get to work.  Papa and Yuri will be home at lunchtime to burn the chametz.

The mention of Yuri’s name made Miriam smile. A childhood friend of her father’s, Yuri Ameniv worked in the store with Meyer. Unmarried and with no living family, he doted on Miriam and Eli, and she could not remember a time when “Uncle” Yuri had not been part of their lives.

Still unhappy about having to help her mother and furious at the thought of sharing her bed with her cousins, Miriam spent the morning doing her chores. By the time she had polished her great-grandmother’s silver holiday candlesticks, trimmed the wicks on the glass-bowl kerosene lamps, and washed and dried the Passover dishes, Meyer was making his way up the dirt path to the house.

Sadie greeted her husband with a kiss, touching his cold cheek with her warm hand, inhaling the familiar smell of pipe tobacco that clung to him. “Where’s Yuri? I made enough potato soup for both of you.”

“There is so much to do at the store before the holiday; he decided to stay,” said Meyer, shaking his head slightly and sending his wife a look that clearly meant he would explain everything to her later. “I should get back too; with Pesach coming, there were a lot of people in the store when I left.”

Sadie did not question him further and handed Meyer the bag of chametz.

Clouds the color of a stormy sea cast a chilling darkness over the day. Pulling up the collar of his long black coat to ward off the biting cold, Meyer placed the bag of leavened foods in a metal barrel in the yard behind the house, making sure not to trample the purple blooms just beginning to poke through the soil in Sadie’s garden.

As he lit the fire, he found unexpected comfort in reciting the traditional prayer uttered by centuries of Jews before him as they prepared for Passover: “Blessed are You, Lord our God, King of the universe, who has sanctified us by His commandments, and commanded us to remove the leaven.”

Meyer moved closer to the fire for warmth and watched as the flames caught and quickly consumed the chametz. A sudden gust of wind stirred the ashes, sending them swirling upward like a swarm of blackened butterflies. As the embers popped and sparked, Meyer’s thoughts drifted back to his life before Sadie and the children, when he called Kiev home.

Life for Jews in Kiev had always been difficult, but in 1881, after Tsar Alexander II was assassinated and rumors began to circulate that Jews were responsible, it became intolerable.  Bad economic conditions only heightened lingering anti-Jewish hatred. Even his friend Yuri, who was not Jewish, was harassed because of his friendship with Meyer.

Fueled by false reports of Jewish aggression in the press, the simmering anti-Semitism boiled over, and within a month of the Tsar’s death, the pogroms began. While the police and government officials stood by, bands of rampaging townspeople burned Jewish homes, looted Jewish-owned businesses, desecrated synagogues, and turned their wrath on the people of the Jewish community.

At school when the worst violence broke out, sixteen-year-old Meyer ran toward his home as news of the rioting spread. Fear rose in his throat as billowing clouds of black smoke filled the horizon and darkened the sky.  His heart pounding, he crested the hill that led to his home and stared in horror as his house was engulfed in flames.

“Mama! Papa!” he screamed, running blindly toward the inferno.

Choking on the acrid smoke that clogged the air, Meyer raced toward the still-standing barn, praying his parents were safe and hiding inside. Hands shaking so badly he was unable to gain entrance, he kicked the door until it splintered open.  Inside, their cow and horses were gone, and the eerie quiet sent a surge of dread through Meyer.

Frantic to find his parents, he was only a few steps into the barn when he saw his father’s body lying face down in a pile of blood-soaked hay.  Meyer’s mouth went dry, and he felt as if all the air had gone out of his lungs. His legs felt disconnected from his body, and he stumbled to where his father lay. Taking his father’s limp body in his arms, Meyer looked down to see he had been bludgeoned so brutally he no longer had a face.  Drenched in his father’s blood, Meyer slipped into a pool of blackness.

When he woke, the first face Meyer saw was Yuri’s. He grabbed his friend’s hand and sobbed, “My father is dead.  I couldn’t find my mother.”

Mikhail Ameniv, Yuri’s father, sat down on the bed. “Meyer, there was rioting against the Jews. People from town ….” He stopped, unable to tell the weeping boy more.  “As soon as we heard what was happening, we rode to your house, but we were too late.”
“My mother?”

Mikhail shook his head and rested his hand on Meyer’s shoulder. “I’m so sorry, son; we found her body in the charred ruins.”


***
The sound of laughter coming from the house brought Meyer back from his terror.

Now there were rumors circulating that the same organized violence against Jewish businesses and homes was being planned for Kishinev within the week.  Meyer shuddered as memories of the horrors of the Kiev pogrom overwhelmed him: The smell of burning flesh, the ashes that rained down on the scorched earth, the unbearable anguish of burying the battered and burned bodies of his parents.

Gazing into the kitchen, he could see Sadie and Miriam laughing and wiping matzah flour from each other’s cheeks. “I will not let it happen again,” he said to no one. “I will not lose someone I love again.” 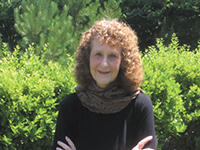 Sharon Gloger Friedman is the author of Ashes, winner of the 2019 Next Generation Indie Book Award for Historical Fiction, and the 2019 New Apple Summer E-book Award for Historical Fiction. Her essays and articles have appeared in The Boston Globe, Woman’s World Magazine, Yahoo News, and Examinar.com. A native of South Florida, she now resides in Georgia with her husband. Visit her website at www.sharonglogerfriedman.com. 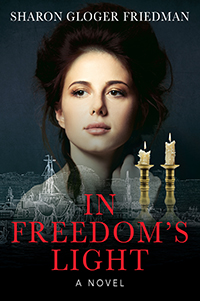