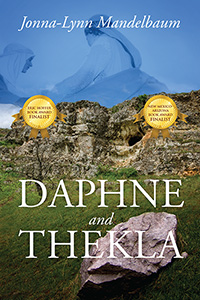 Roman society was oppressive for women, but Thekla has even more challenges to face than most. Her own mother, Theokleia, wants her dead, and will stop at nothing to destroy her. She sees the perfect opportunity when Thekla becomes a follower of the Apostle Paul. She conspires with Thekla’s fiancé to have Paul arrested, and when Thekla bribes the prison guards in order to speak to Paul, her evil mother uses her influence over the judge to have Thekla condemned to death. Bravely, Thekla climbs her funeral pyre…but Fate has something greater in store for her. A sudden storm quells the flames, and saves her life. The crowd disperses in terror and Thekla—persecuted, abandoned, naked in the town square—takes control of her destiny. She covers herself with a tarp and seeks refuge with her father’s friend Daphne, a wise and loving woman who has been like a mother to Thekla, although as a courtesan, she herself lives on the fringe of society. With Daphne’s support and guidance, Thekla embarks on the journey of a remarkable life, determined to find and follow the Apostle Paul. With unexpected powerful allies, and the strength of her own determination, Thekla carves a path for herself that no Roman woman has ever walked before. Imaginative, well-researched, and beautifully written, Daphne and Thekla is a powerful portrait of friendship, of faith, and of women transcending the boundaries of their time and culture. A 2016 finalist in the Eric Hoffer Book Awards. 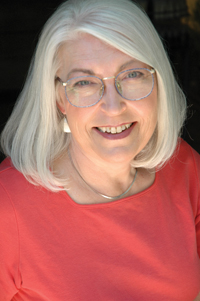 Jonna-Lynn Mandelbaum earned a doctorate in education from Georgia State University and a master’s degree in public health from The Johns Hopkins University. She graduated from Philadelphia’s Methodist Hospital School of Nursing and received a bachelor’s degree in nursing from Lebanon Valley College prior to her appointment as a missionary nurse to Mozambique. International Health was the dominant focus of her professional career. Now retired, she resides in northern New Mexico with her dachshunds. www.jonna-lynn.com 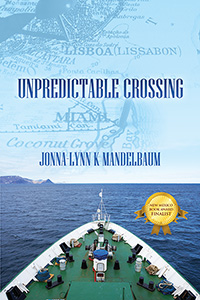